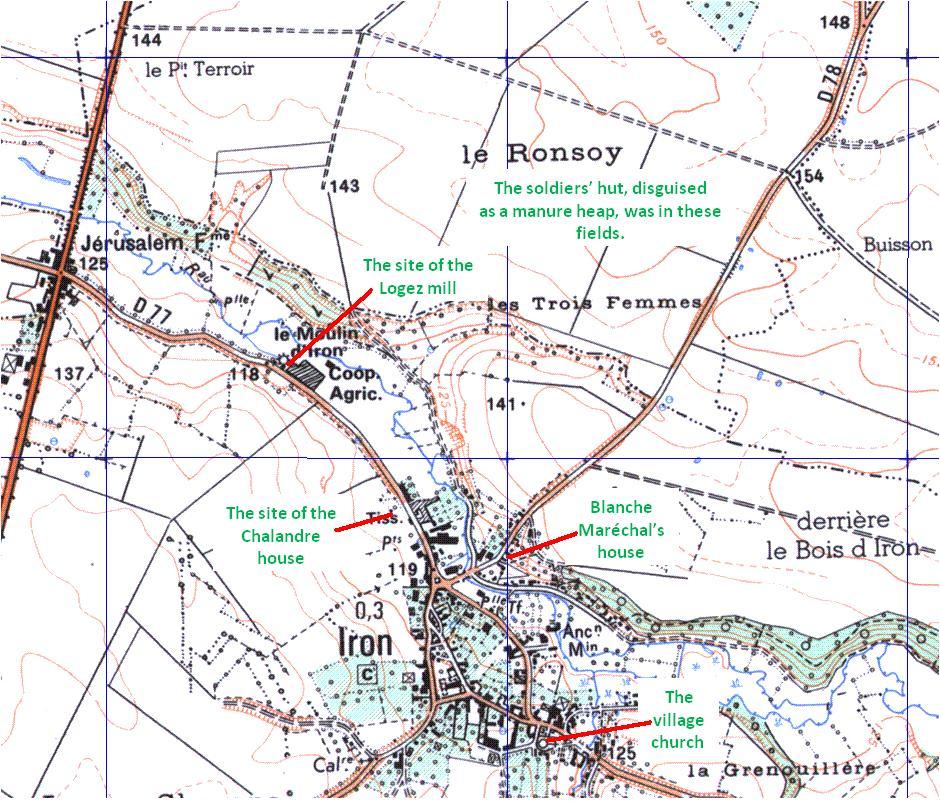 Map of Iron and principal sites

The first sites we shall visit in Iron are the places where the soldiers were hidden until their betrayal. Drive through to the centre of Iron on the D78 to the small square and continue on that road out of the village. About 200-300 metres on your right there is a large industrial building at 28 Rue d’Hannappes. Park where you can on the roadside. 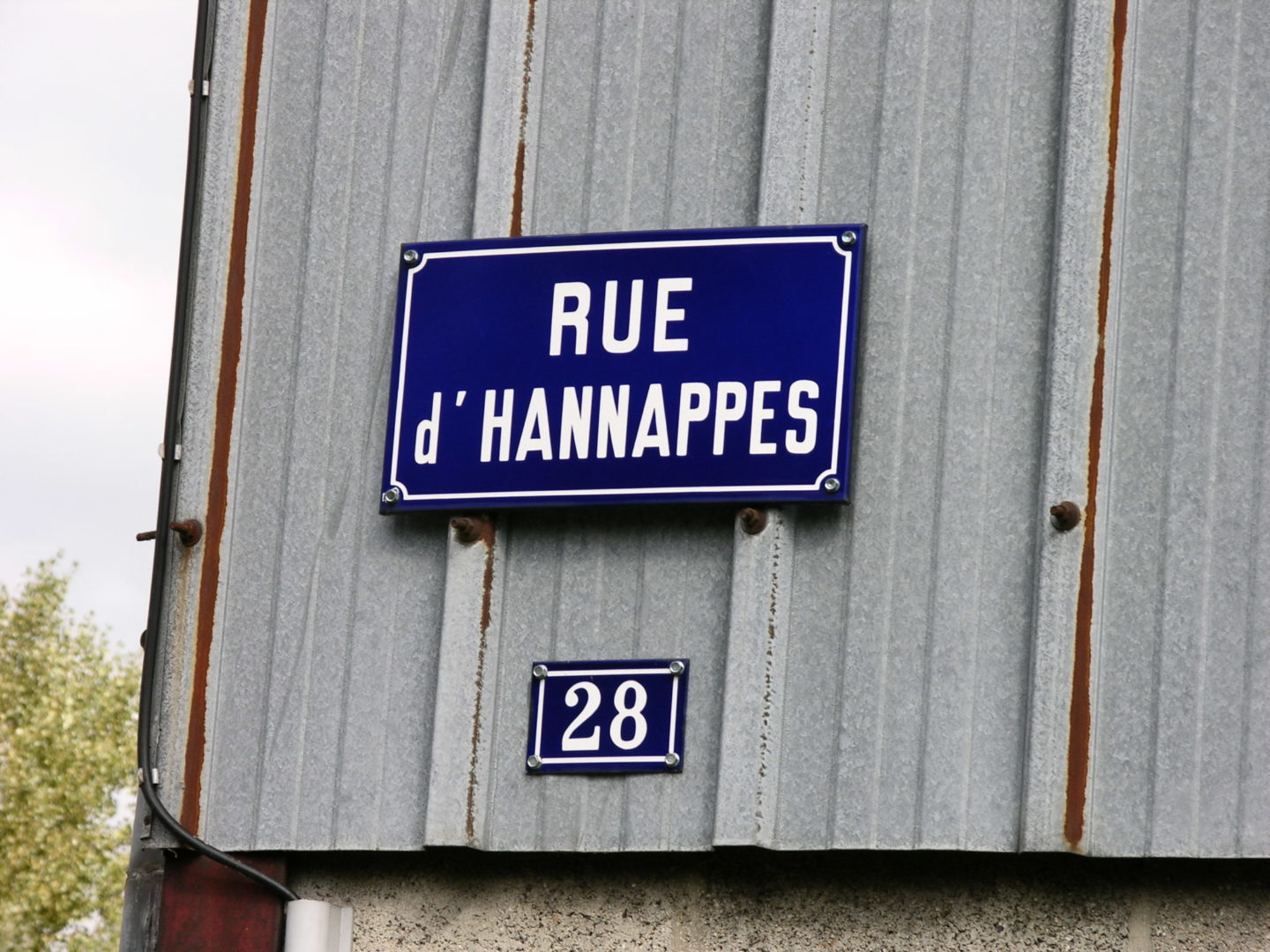 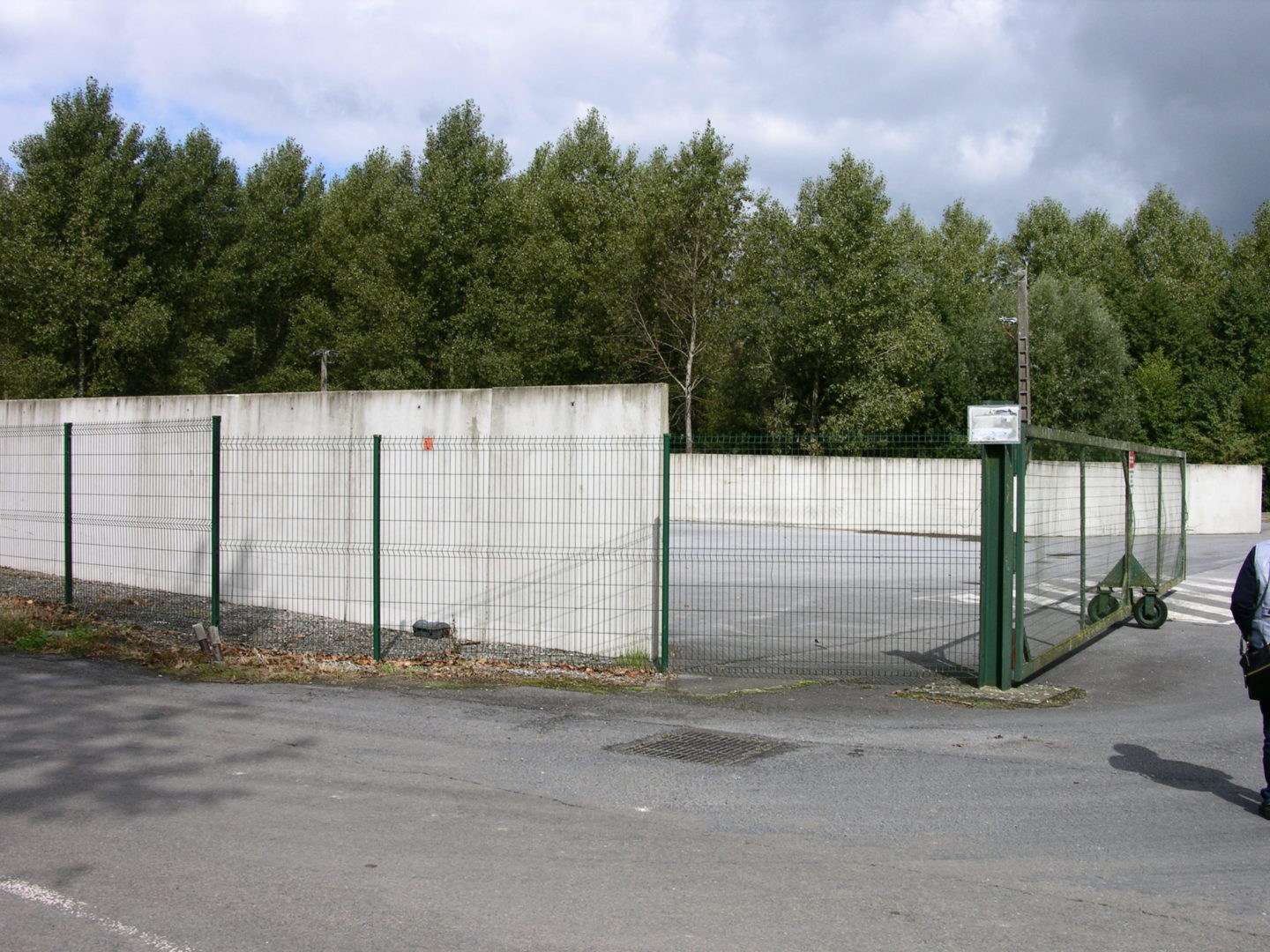 Site of the former mill in Iron

Site access may be restricted but if it is safe to do so, walk into the yard. The original site of the mill, owned by the Logez family and which sheltered some of the soldiers, is on your left. It is now a compound with concrete walls (pictured). Beyond the yard in amongst the trees is a small stream. About 100 years ago this was a substantial river (l’Iron) sizeable enough to drive the water-powered mill. It was across this river that the soldiers temporarily escaped to avoid a German search patrol. The mill was burned down by the Germans as retribution when they discovered some of the Iron 11 had been hidden there (see picture). 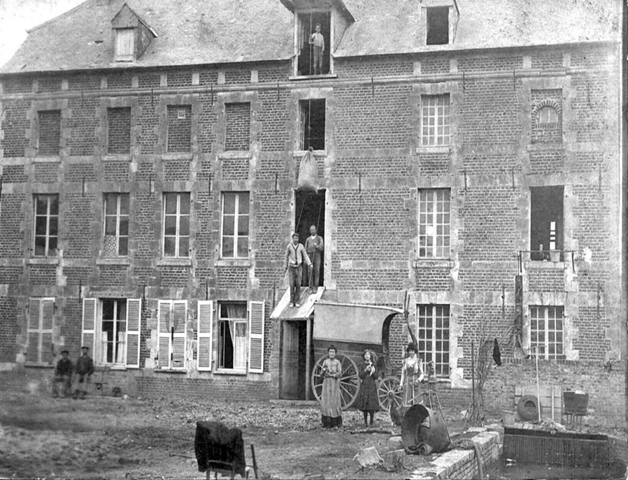 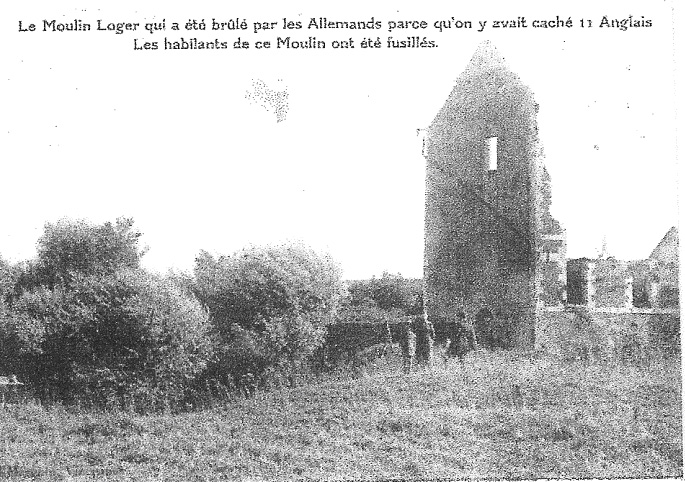 The remains of the original mill after it had been destroyed by the Germans.

At some point in early 1915, the soldiers were moved from this mill to another disused silk mill in the village which we will visit next.

Retrace your steps to the village of Iron along the D78, pausing as you re-enter the village. On your left, you will see the remains of the original silk mill (currently being restored) which became the soldiers new hideout. 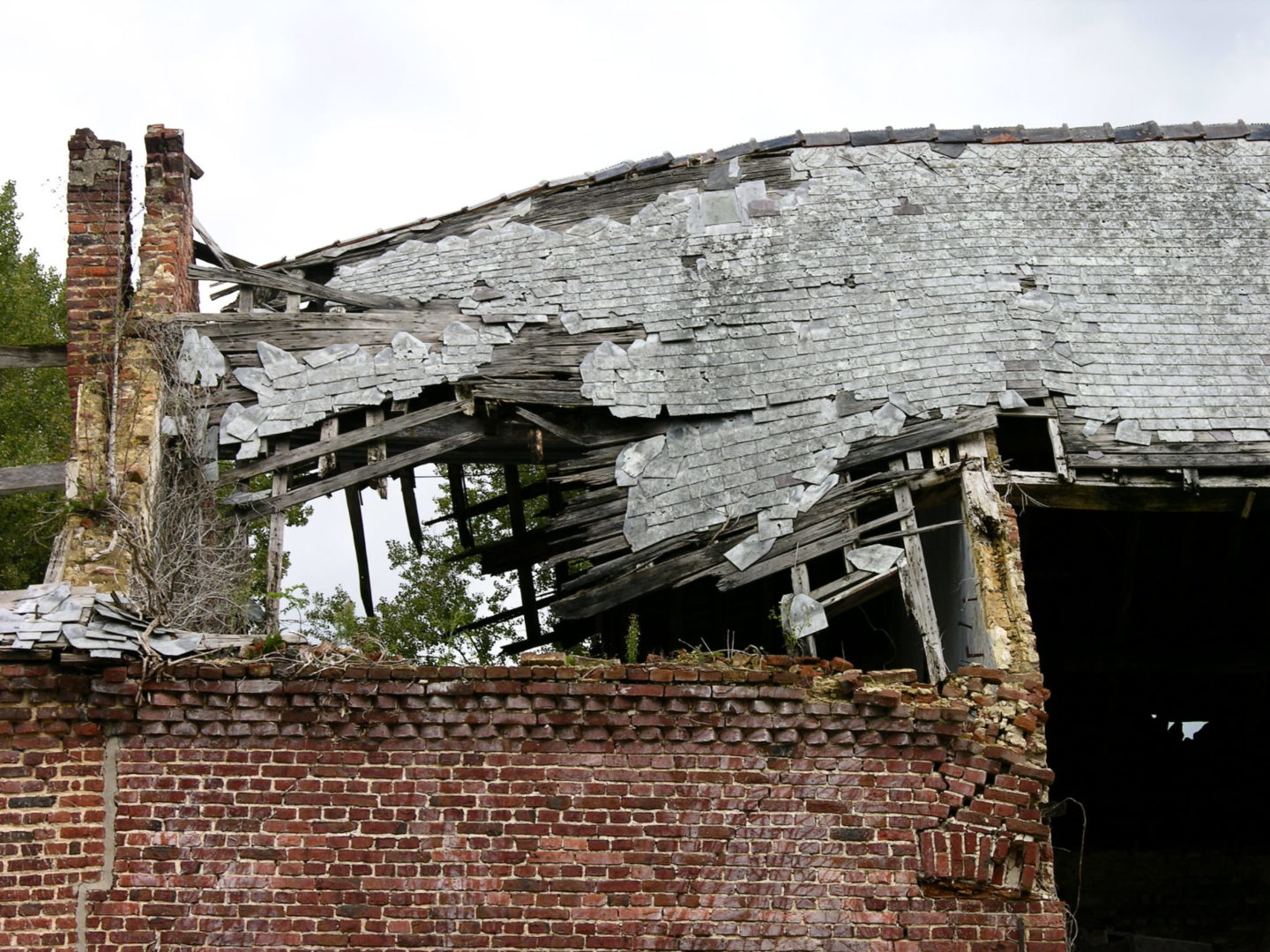 The mill owner, M Chalandre, lived almost opposite and his house was also torched by the Germans when they discovered he had helped conceal the soldiers. The site of his house was behind the modern house there today; roughly where the large evergreen tree is located (see photo) 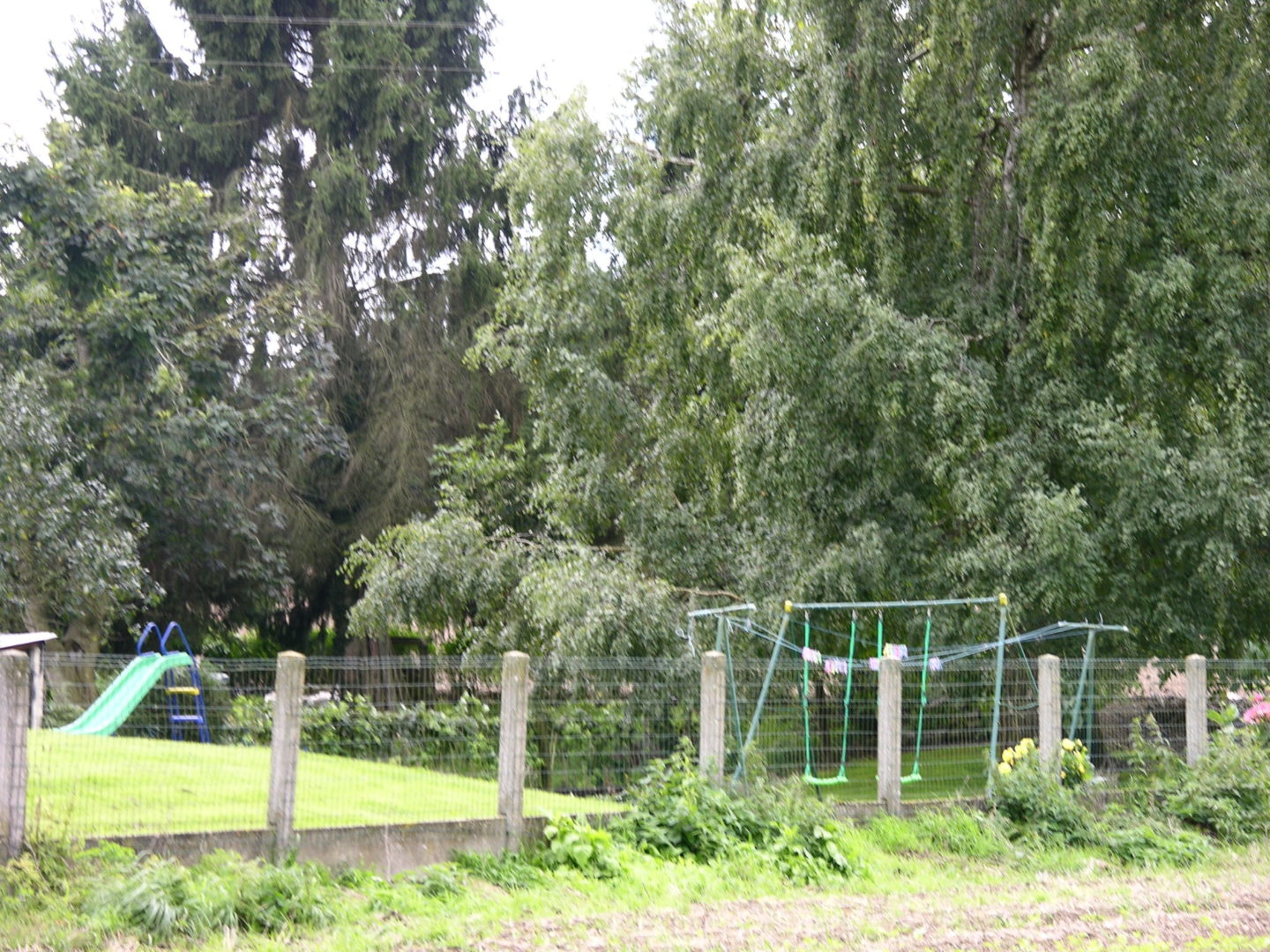 M Chalandre’s house originally stood at the rear of the current house, near where the large conifer is now

Drive to the centre of Iron and park in the car park in front of the sal de fête. In the centre of the crossroads is the monument to the Iron12. 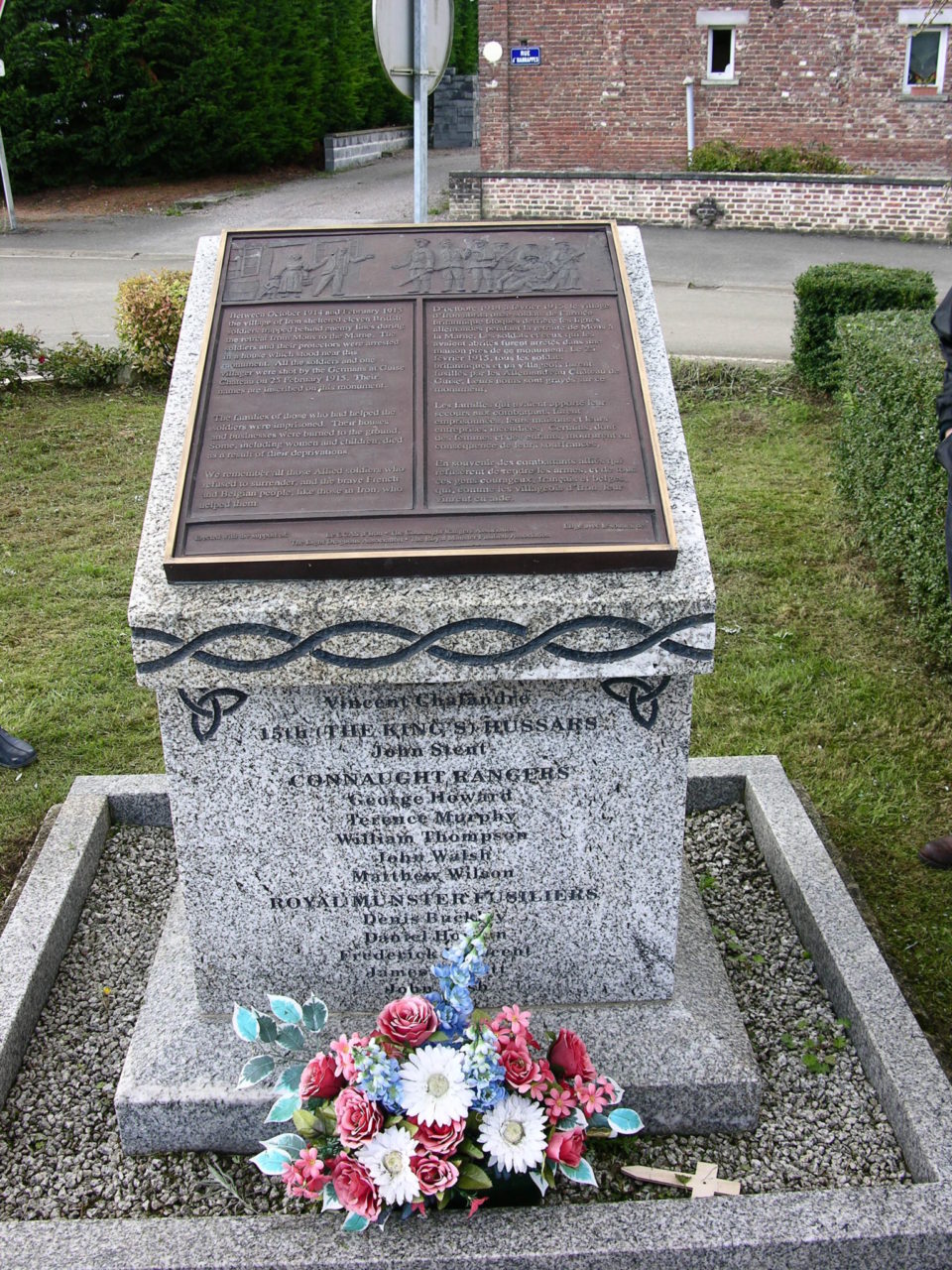 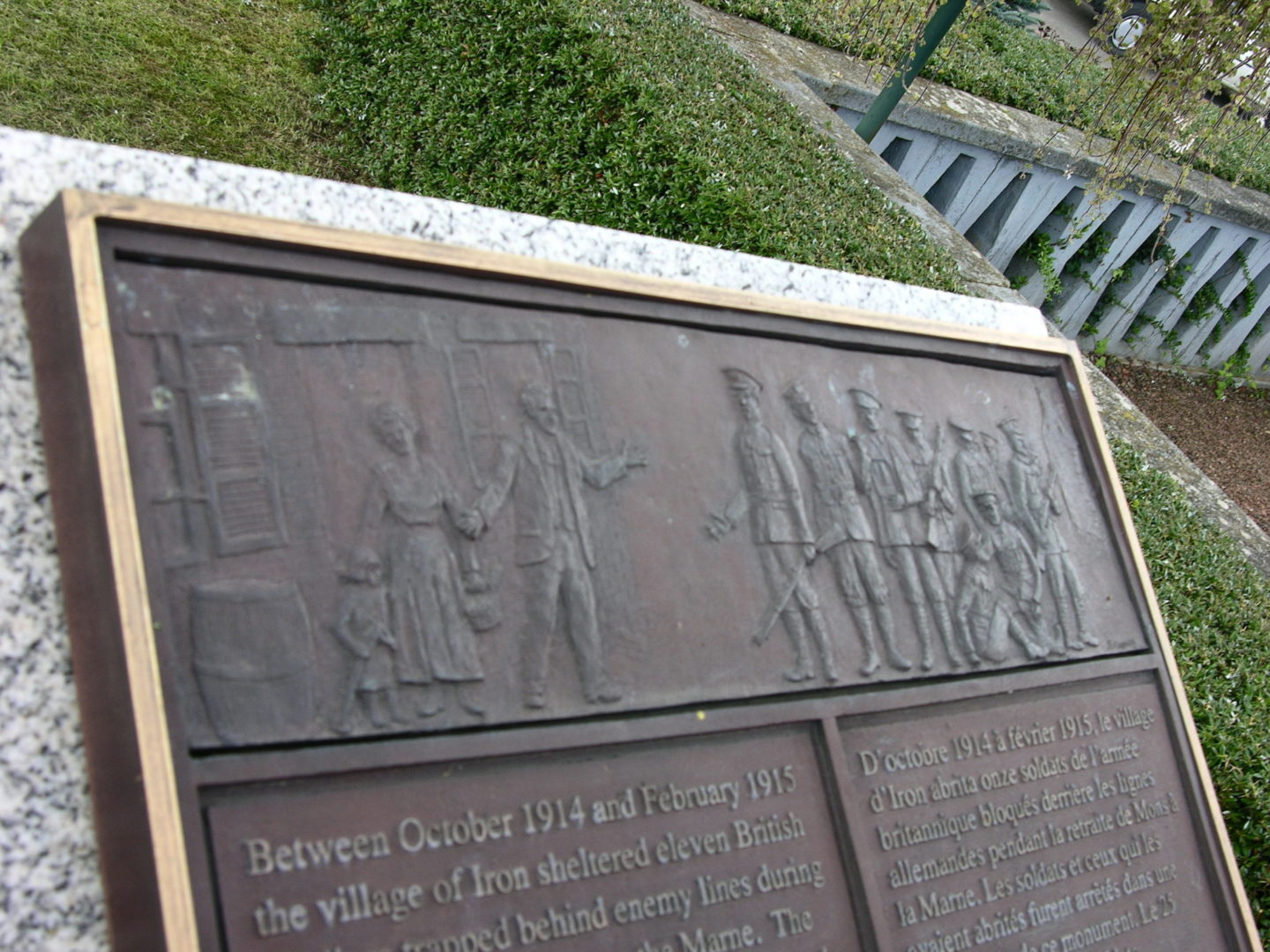 The memorial in the centre of Iron

The committee of the Iron Memorial Fund charity raised the funds to create and erect this monument which was inaugurated in September 2011. This was a huge event for a quiet village like Iron and was well attended by people including, the villagers of Iron, local dignitaries, serving soldiers in the Royal Dragoon, representatives of the Royal Munster Fusiliers and the Connaught Rangers, a pipe band, reinactors, relatives of the Iron 12 and descendants of the Iron villagers who risked their own lives to help the soldiers. The gallery on the website, www.iron12.org has photographs from the event.

The village of Iron has changed little in the past 100 years and concealing eleven soldiers in their midst was challenging. The soldiers’ whereabouts were fairly common knowledge in the village and risk of discovery was high. They had already only just managed to evade discovery once in December when something happened which sealed their fate.

Retrace your route where you entered the village on the D78 (Rue de la Neuvelle) On your right is this house: 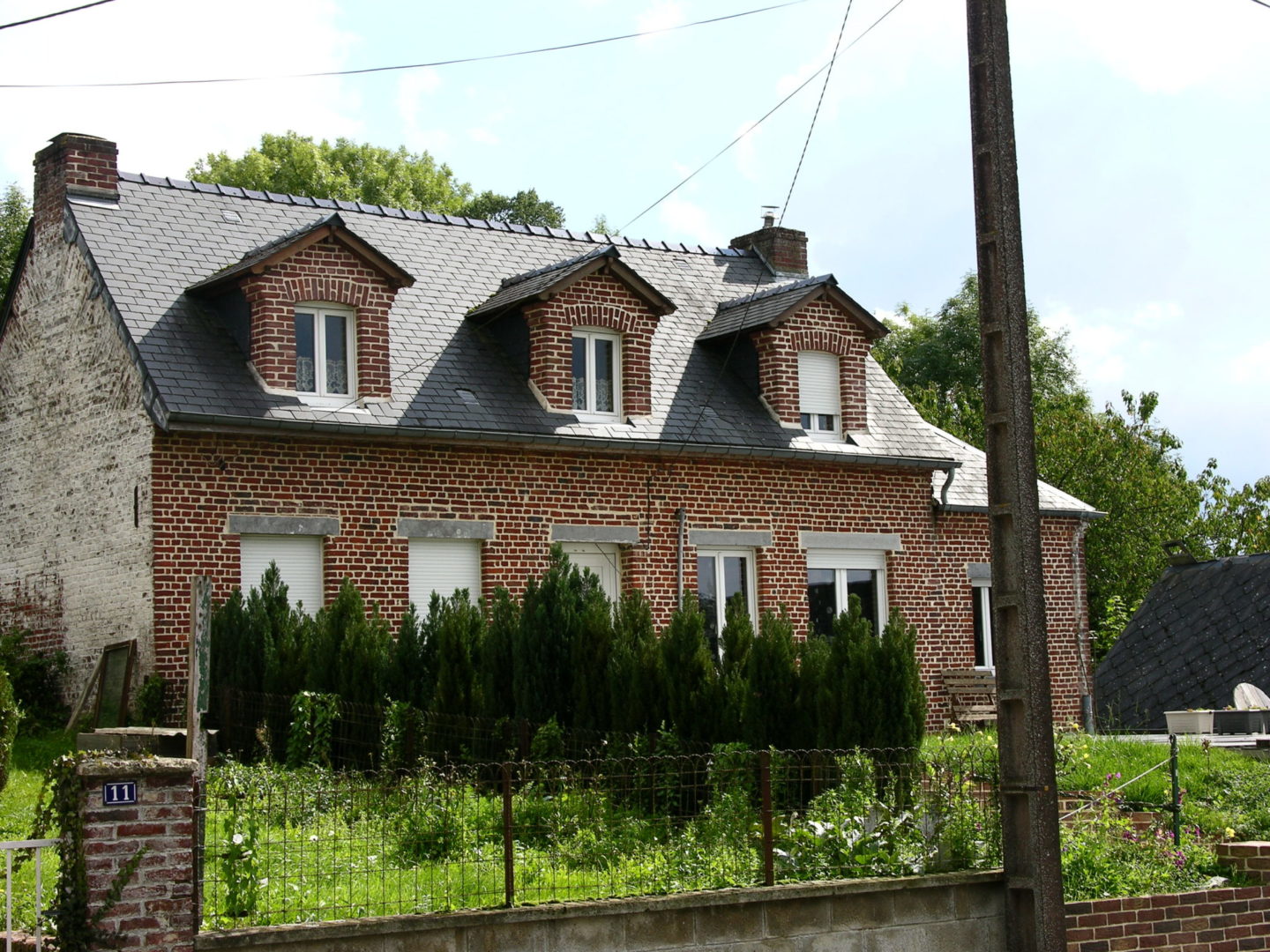 This is the house where Blanche Maréchal lived. She had two lovers; Clovis Chalandre, the 16-year-old son of Vincent Chalandre and a 66-year-old called Bachelet. There was some very indiscreet pillow talk during which Clovis told her about the British soldiers. Blanche told her husband who made his own enquiries, and he stimulated gossip. The news reached Blanche’s other lover, Bachelet

Clovis found out about Bachelet and became jealous. On the night of 21 February Clovis went to M.Maton’s brasserie where Bachelet lodged and threw stones at Bachelet’s window. Bachelet shouted, ‘You’ll pay for this; tomorrow I am going to inform on you and the English – you will all be shot!’ Clovis returned home – and told no one. Bachelet was to be as good as his word and the soldiers were captured along with M. Chalandre. After they were captured, the soldiers were brutally beaten and loaded on to lorries to be taken to Guise. We will follow the route they took after their capture but before we do that, we’ll take a look in the churchyard.

Turn back to the centre of Iron and then on to the Rue de l’Eglise to the church. Park in the layby in front of the church and enter the churchyard through the gate. On your right you will see the graves of Jean Logez and Germaine Chalandre. Jean Logez was the main person who fed and watered the soldiers. She was sent to a POW camp in Germany and it was her, who after the war, produced a bottle containing a piece of paper on which the soldiers had written their names and addresses (see below) 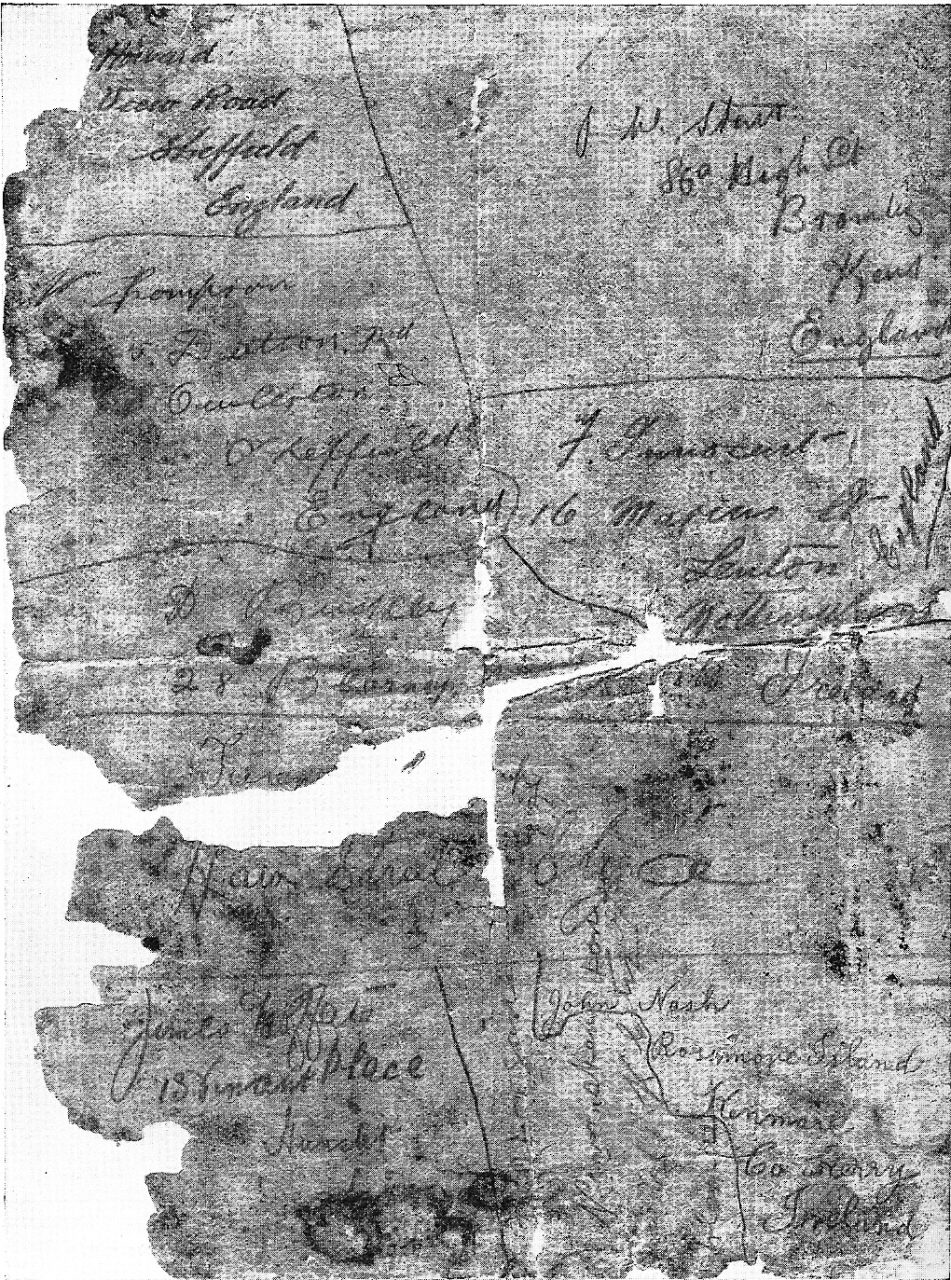 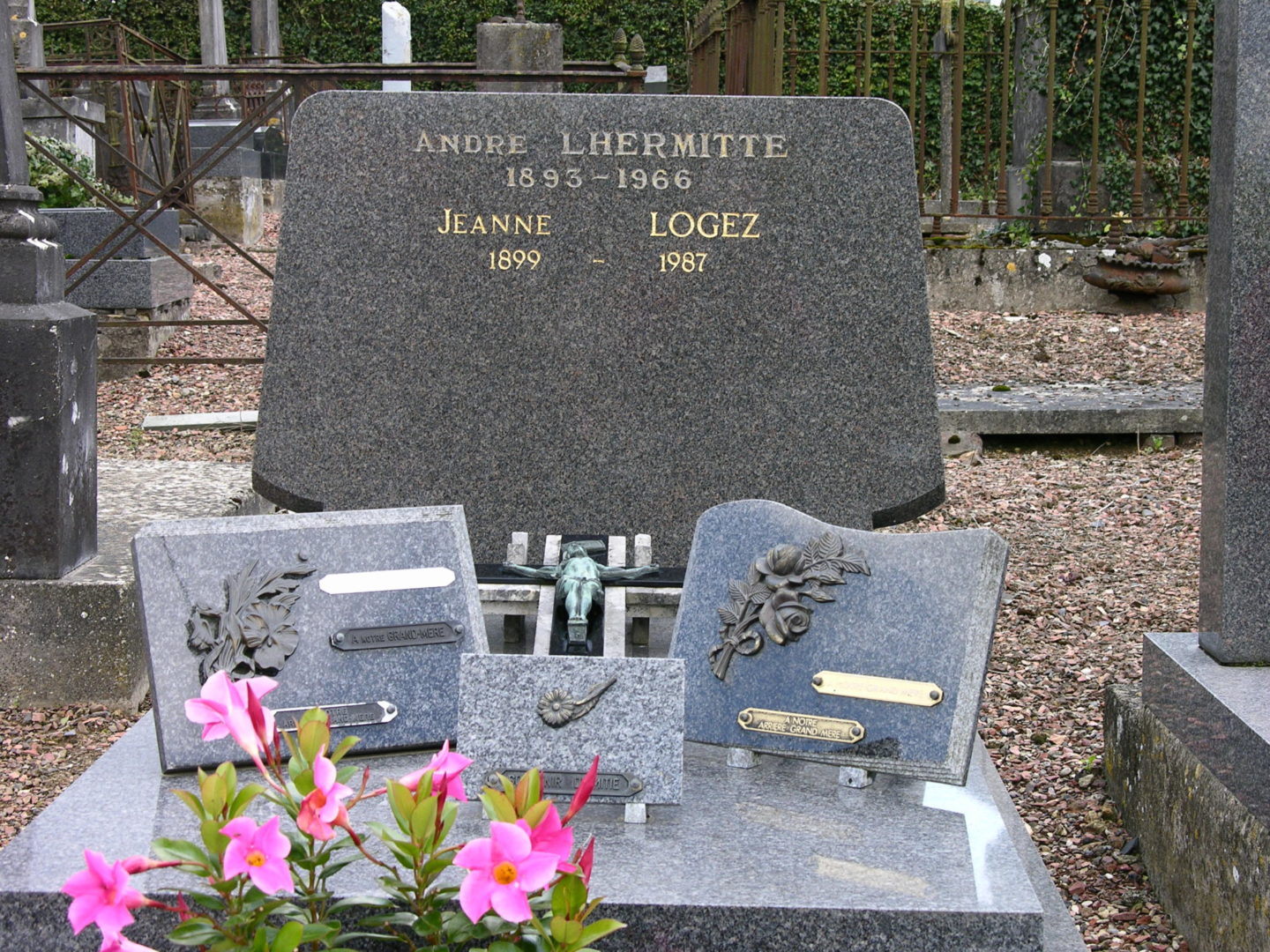 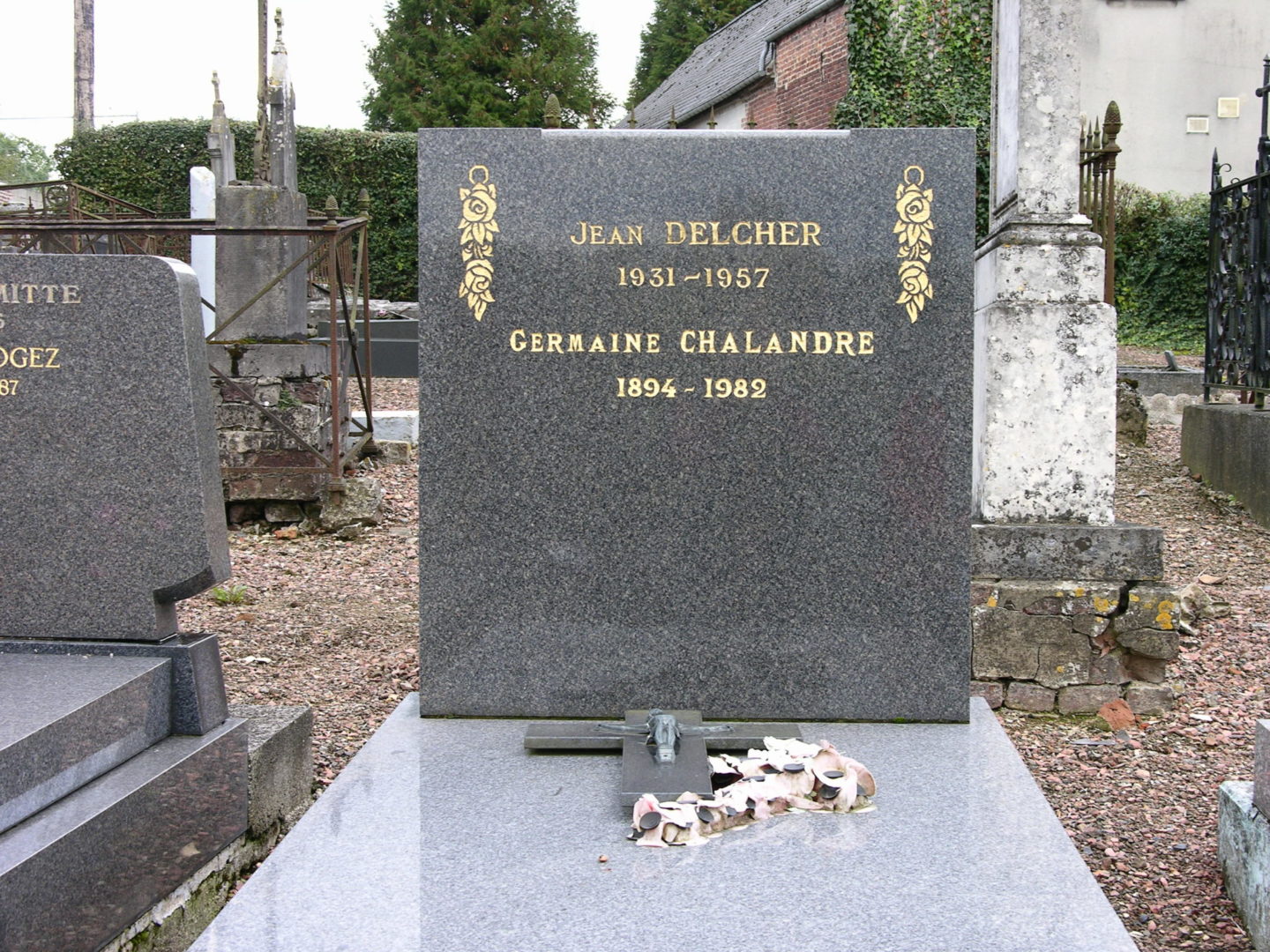 Drive back past the site of the Logez mill on the D78 and at the junction with the D946, turn left towards Guise. This is the most likely route the captured soldiers would have been taken.