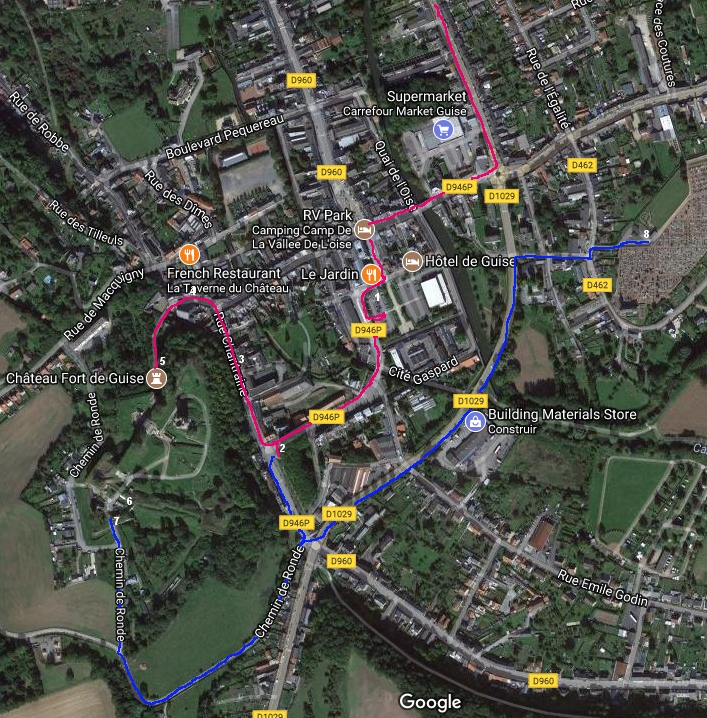 Google Route map in Guise. The points of interest are marked 1 to 8 and are referenced in the text.

Enter Guise (pronounced Gweeze) on Rue Sadi Carnot. At the roundabout turn right on to du docteur rue Devilles. Cross over the bridge and across the following junction. At the next set of traffic lights turn left on to Rue Alfred Chollet. In front of you is a car park (1). This is the most convenient place to park, however, the road up to the Chateau is steep and if you wish, there is limited parking at the Chateau entrance.

Exit the car park to the left along Boulevard Jean Jaurès. On the left at the junction with Rue Chantraine pause to see the 1914-1918, 1939-1945 memorial and the soldiers’ names inscribed. (2) 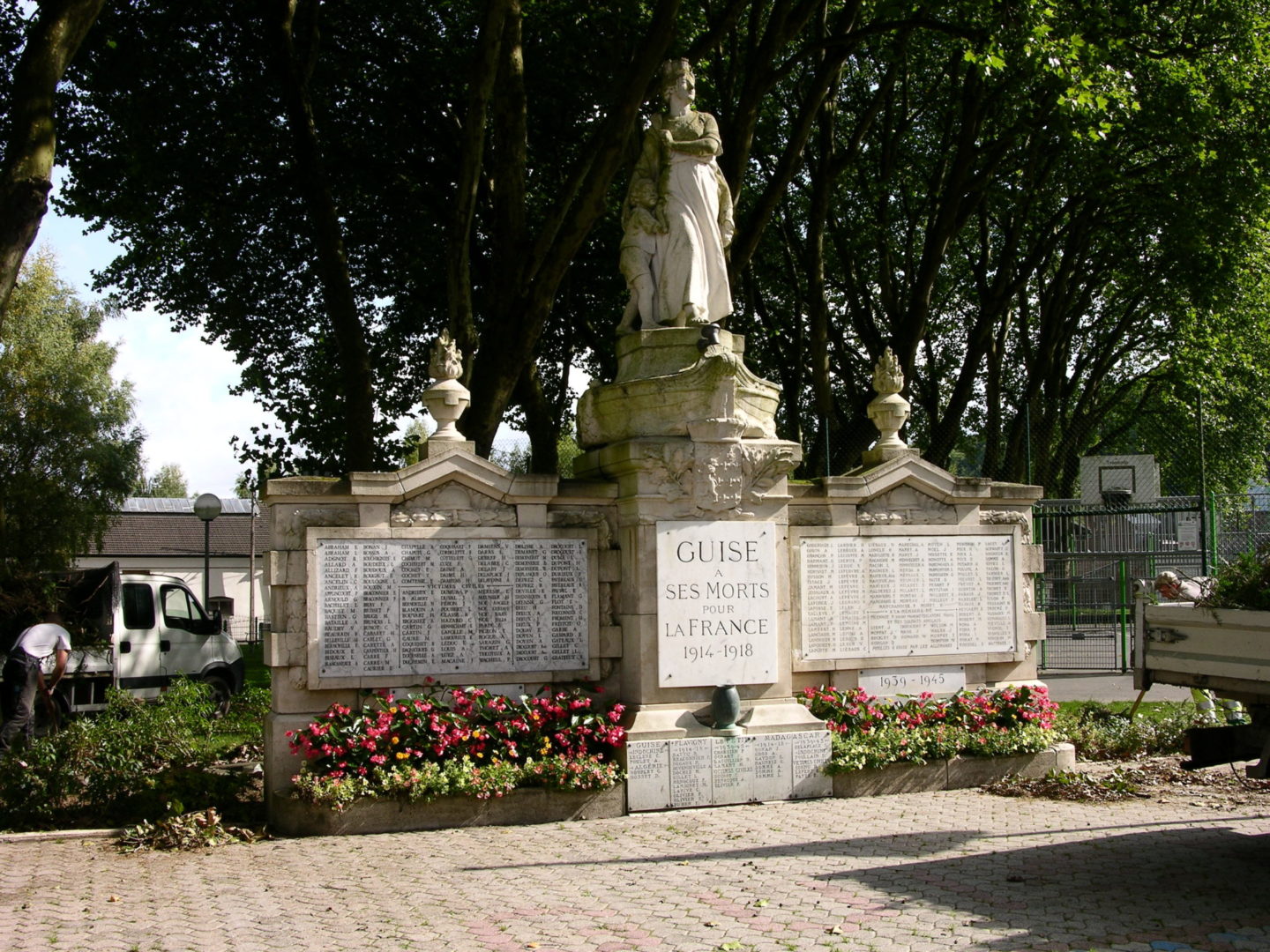 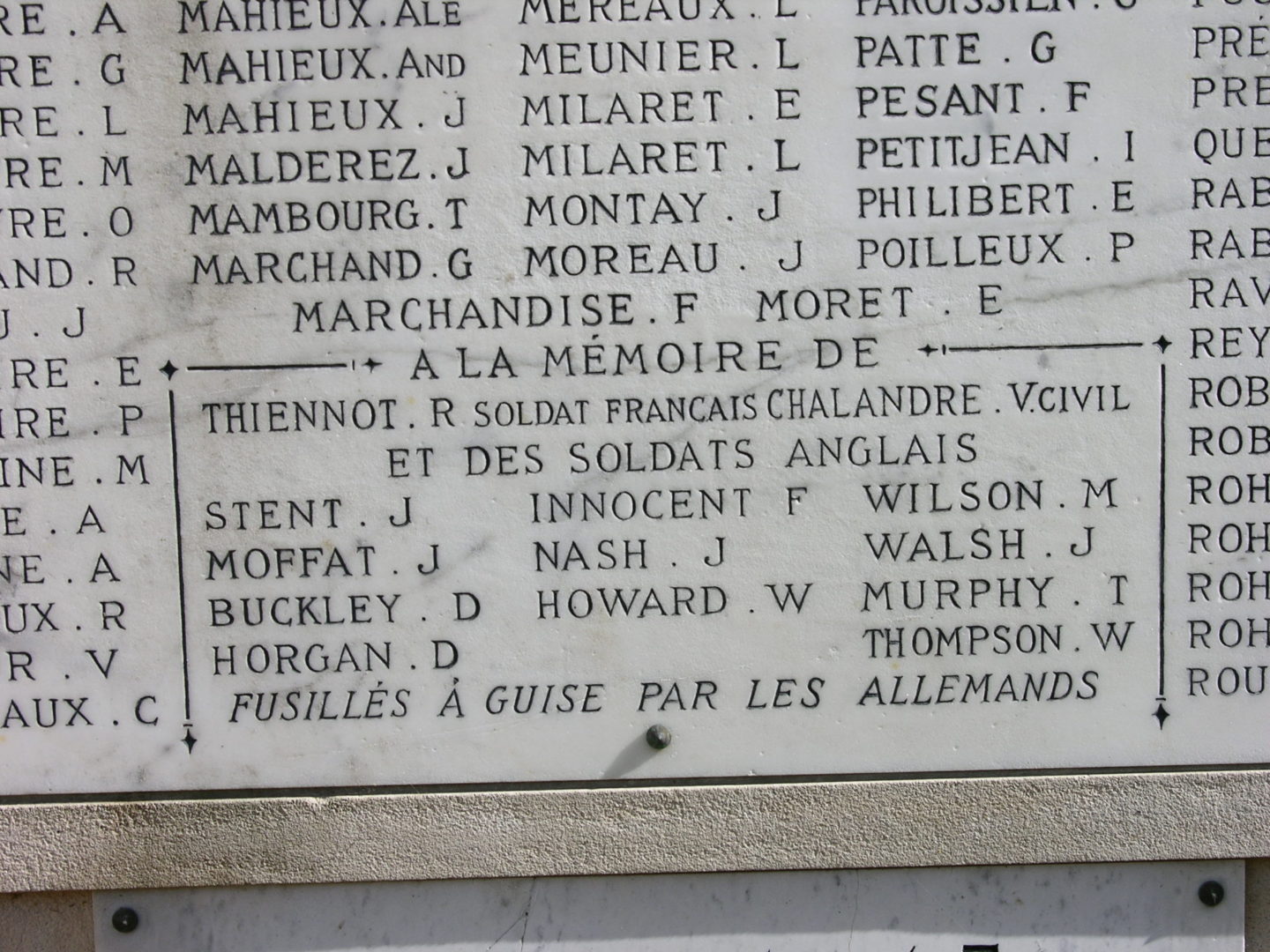 Turn right into Rue Chantraine. A few hundred metres on the right hand side you will see the Marie. (3) 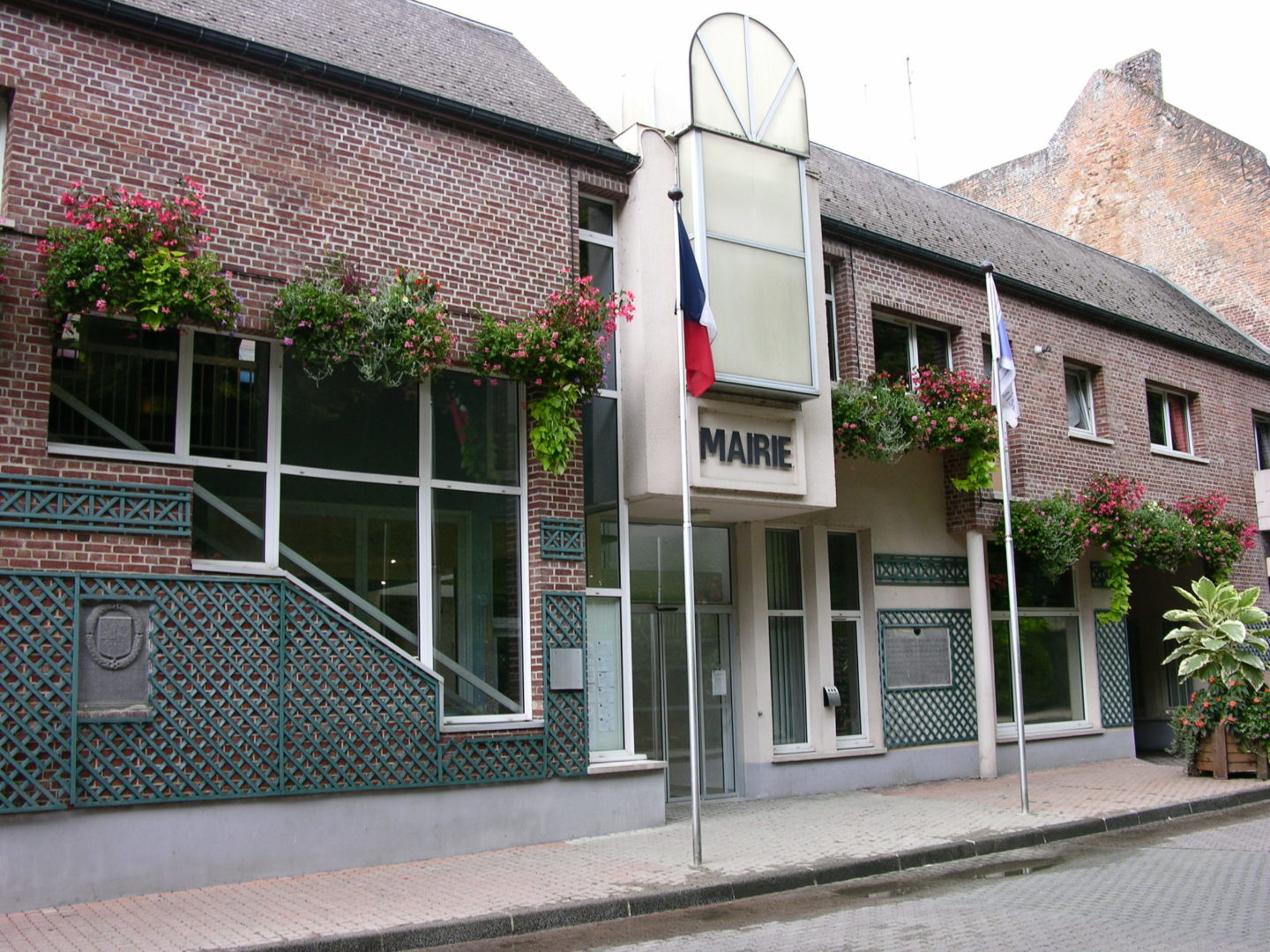 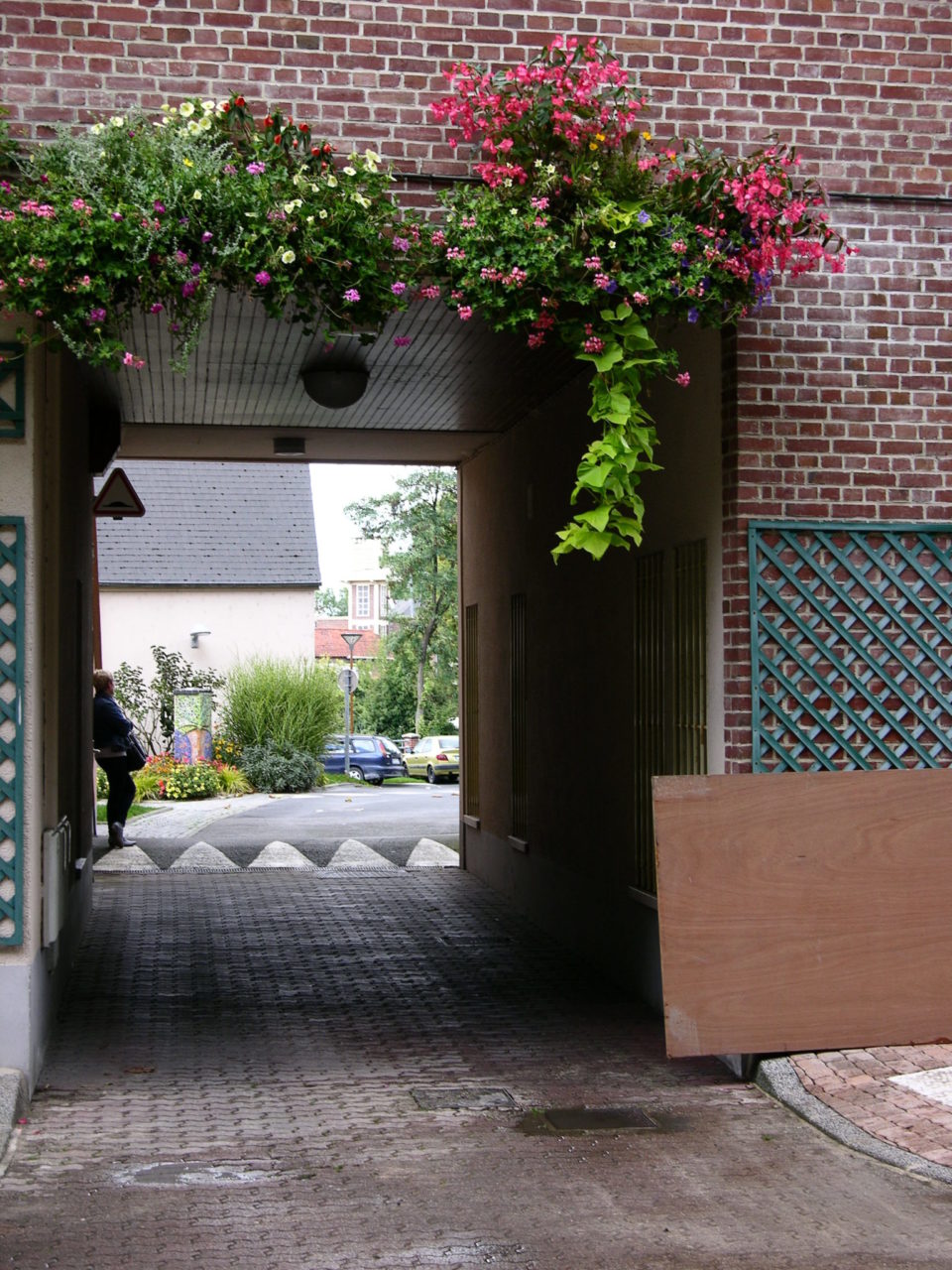 At the front is a passageway leading through to what is now the car park. The soldiers were taken through this passage and led to the cells where they were again savagely beaten.

It was here that Jean Logez, who was collecting a permit, saw Bachelet in the town hall and she knew it was he who had betrayed the soldiers.

Early on the morning of February 25th, 1915, the soldiers were taken from their cells and marched up towards the Chateau. They took what effectively was the back route entrance to the Chateau, probably to avoid any hostility with the local population. Later we will follow that route, but in the meantime, we’ll head up towards the front of the Chateau. 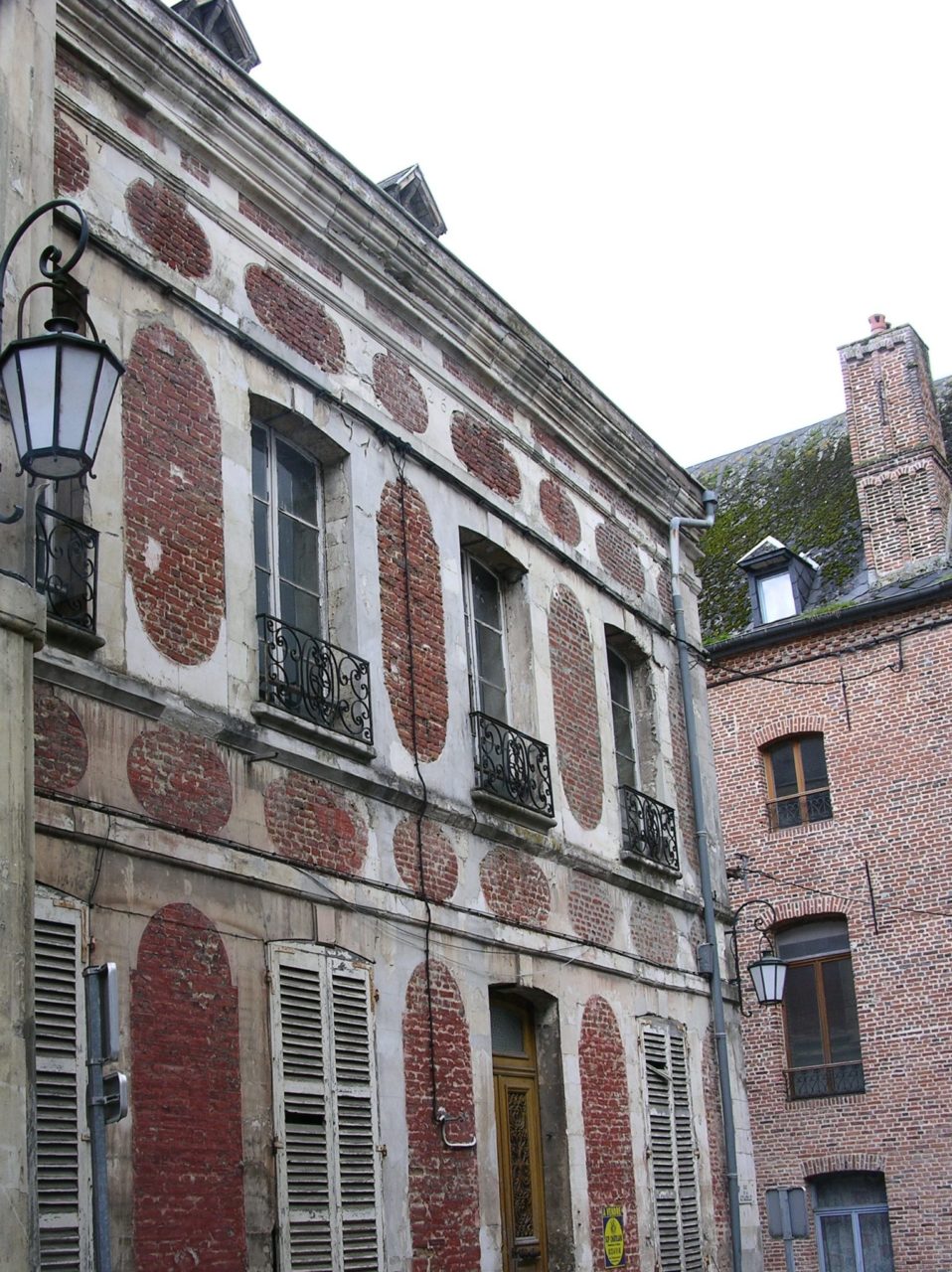 This is the house where Waechter, the German area commander, and the one who ordered the soldiers’ death sentences, lived. (4)

Continue up the steep hill and you come to the fortified entrance to the Chateau (5): 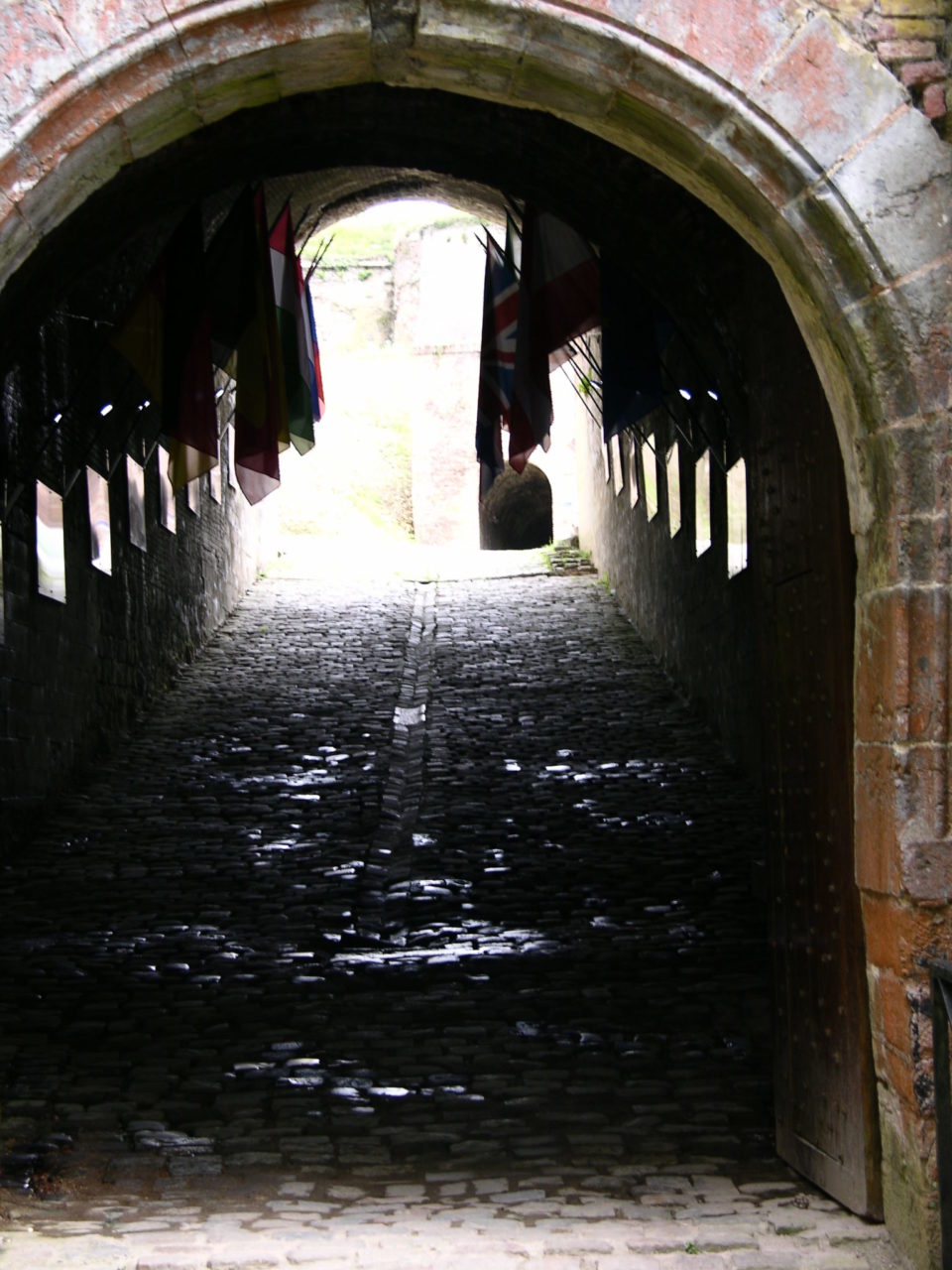 The front entrance to Guise Chateau

This is the entrance passageway to the Chateau. On the right at the end of the passageway is the custodian’s office and shop. The execution spot is now on private ground which is guarded by a fierce-sounding dog, so you must be accompanied to the site. Hopefully you have called ahead and made prior arrangements as suggested earlier. 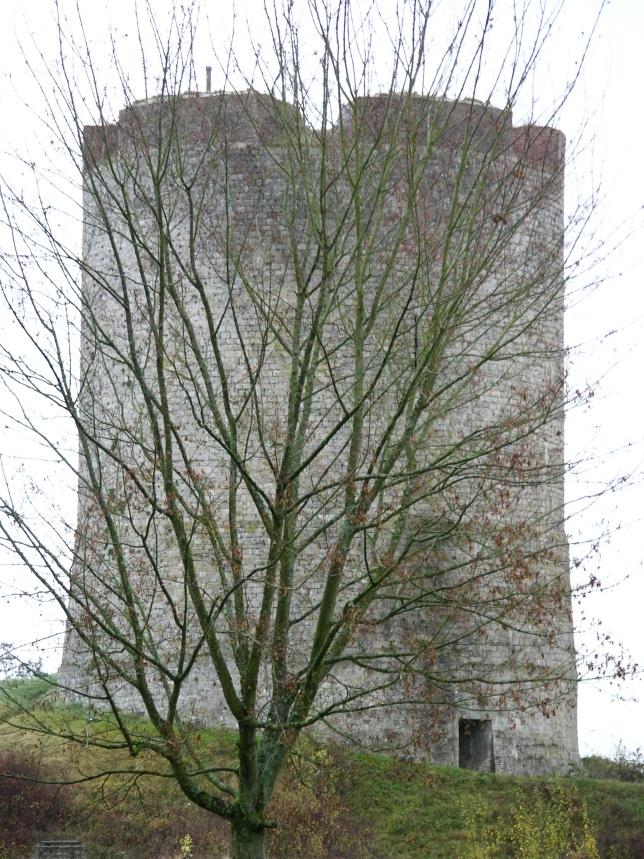 The Chateau tower today which still dominates the skyline

Your guide will take you through the grounds of the chateau to what is the rear entrance. To the left of the entrance is the patch of ground in what was probably originally the external fortification. This is where the soldiers were executed. A plaque marks the spot. (6) 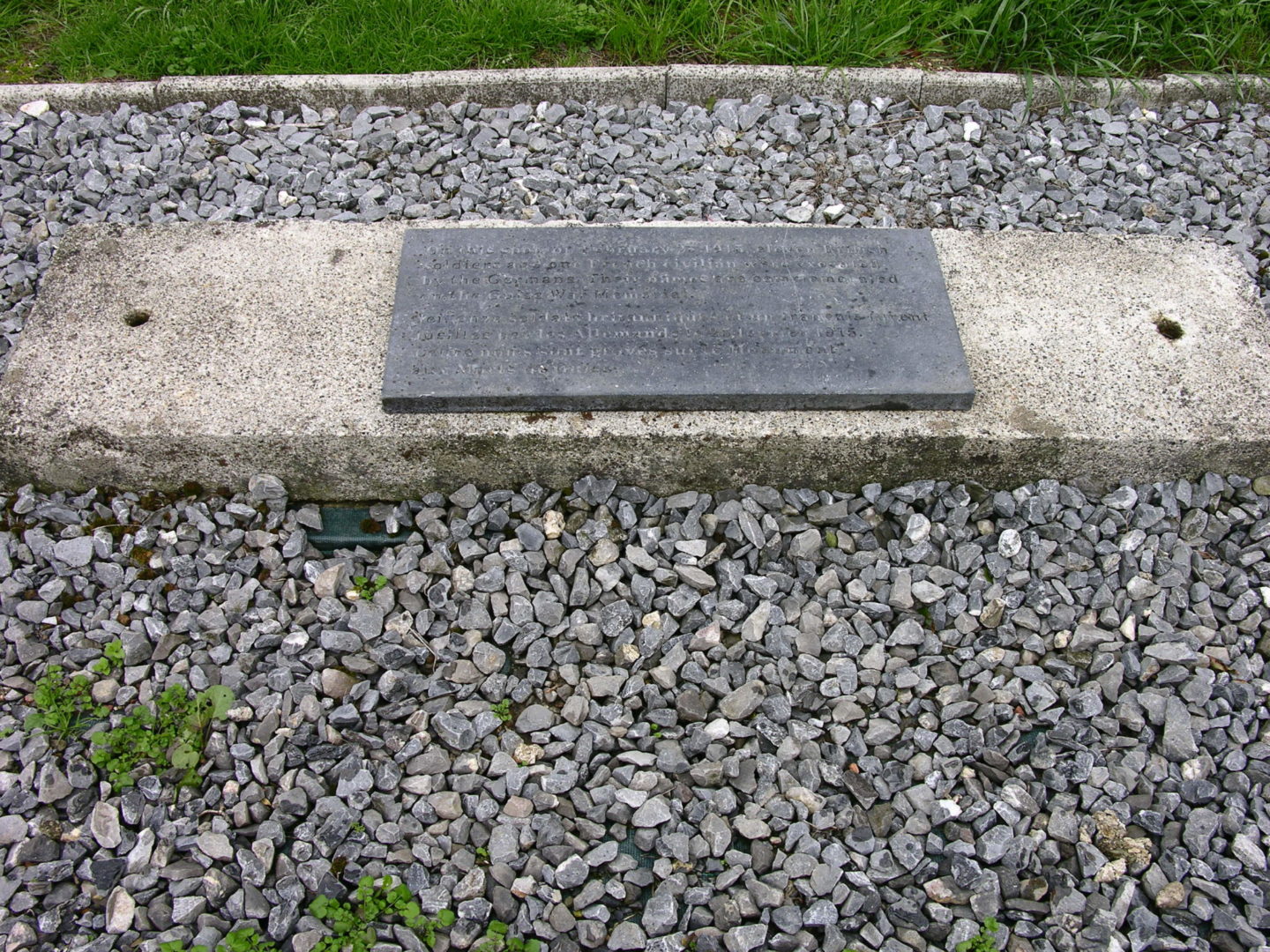 Ponder for a moment on the sheer terror the predominantly-young soldiers must have faced. A freshly-dug communal grave and a firing squad. Knowing your time had come never to see your loved ones again.

In the 1920s the bodies were exhumed and reburied in Guise cemetery which we will be visiting next.

Turning back from the execution spot, on your left you will see doors and another passageway. It was through this entrance the soldiers arrived at the execution spot. We will follow their route from the Mairie to the other side of these doors.

Turn left again on to Boulevard Jean Jaurès and at the memorial turn left on to Rue Chantraine. Go past the petrol station on your right and before the traffic lights carefully turn right into Chemin de Ronde. Follow this road, keeping right all the way to the top until you reach this junction: 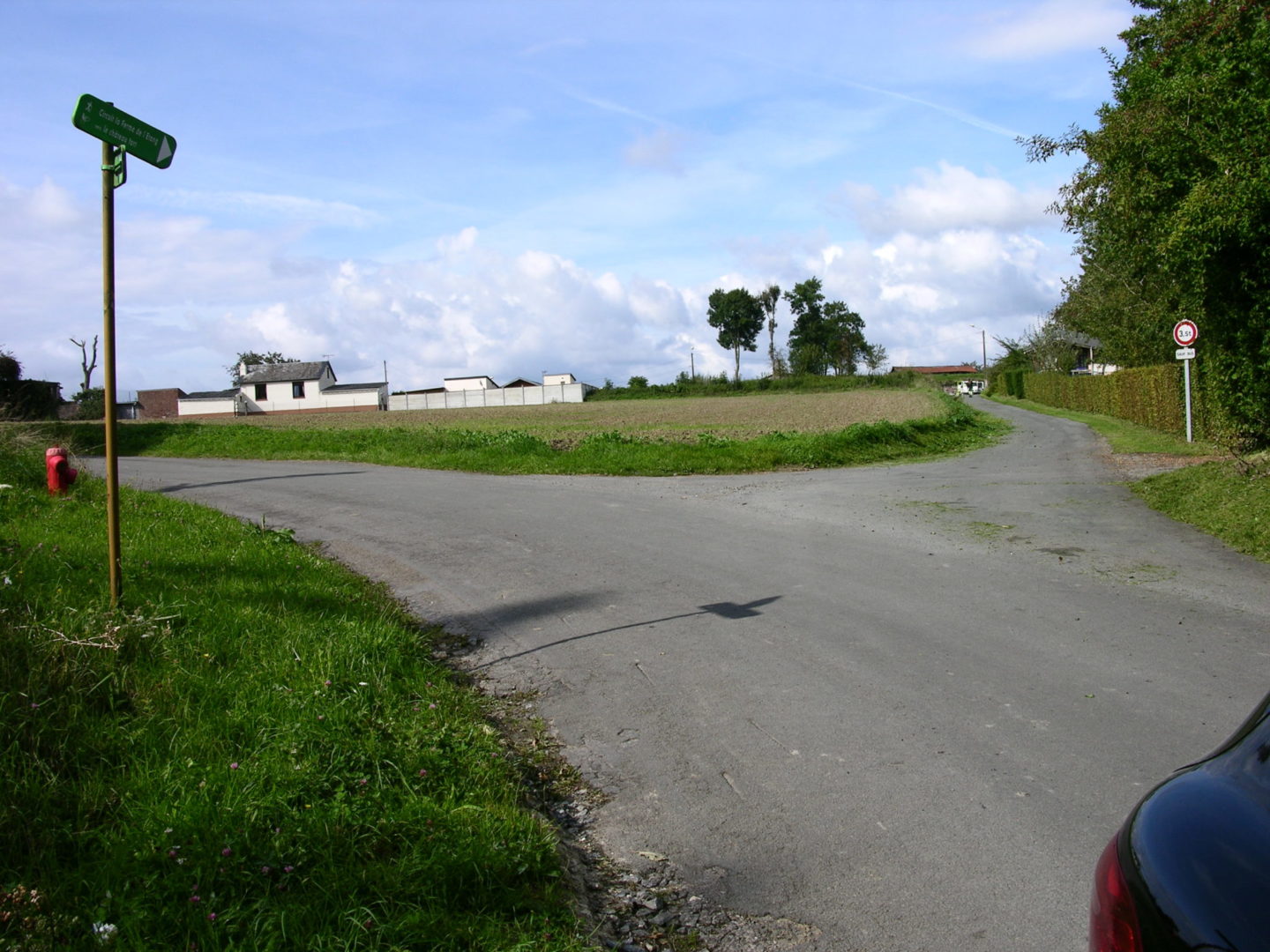 Road junction leading to the back entrance to Guise chateau

Take the right fork down to the rear entrance to the Chateau. (7) 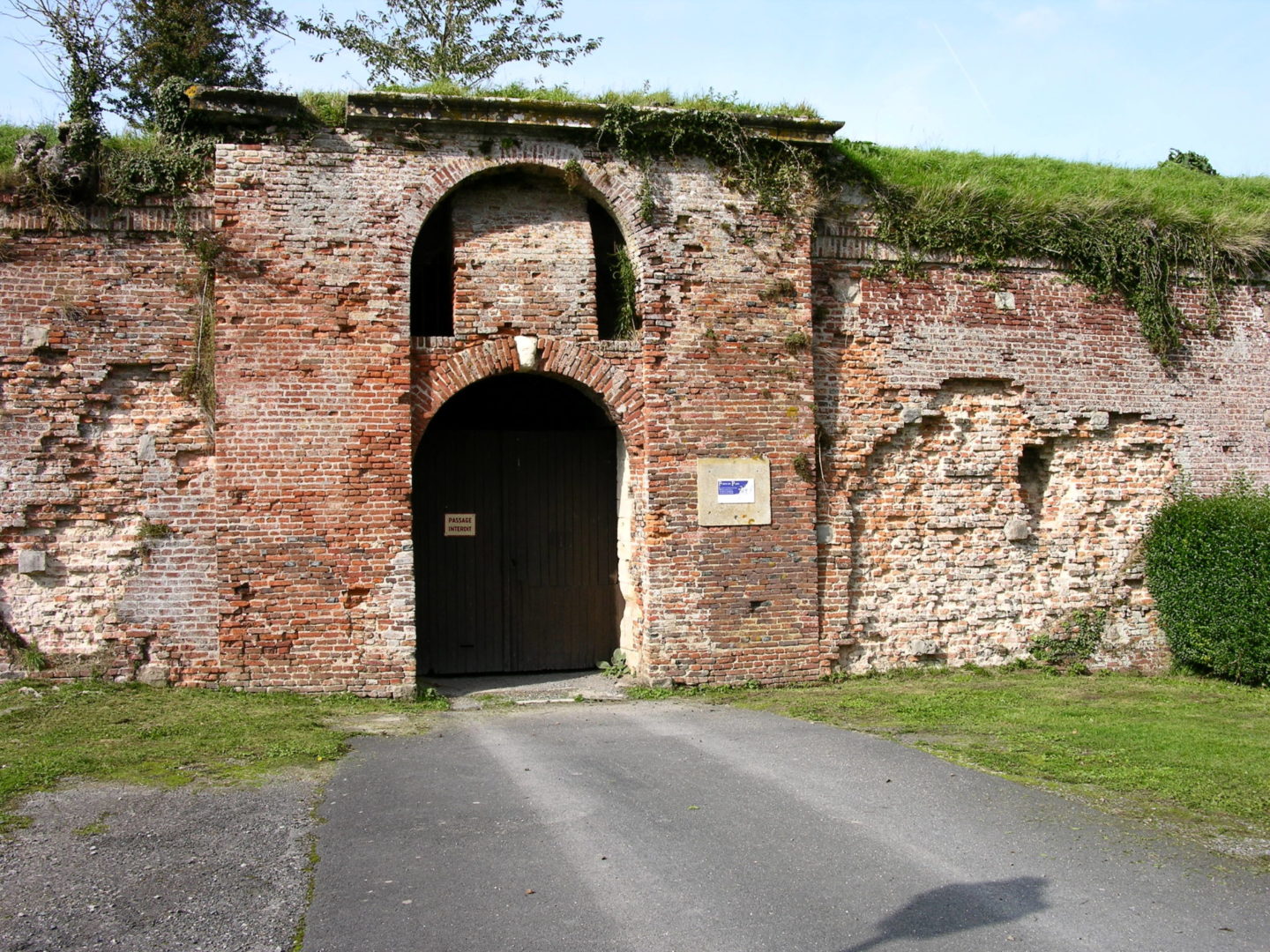 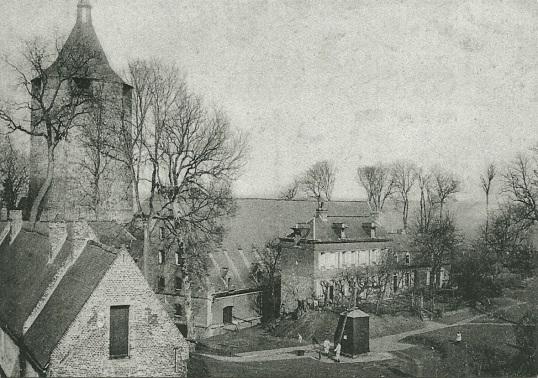 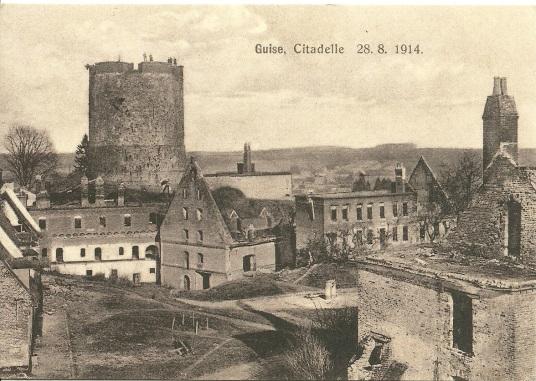 Guise Chateau, 28/08/14 after it had been attacked by the Germans 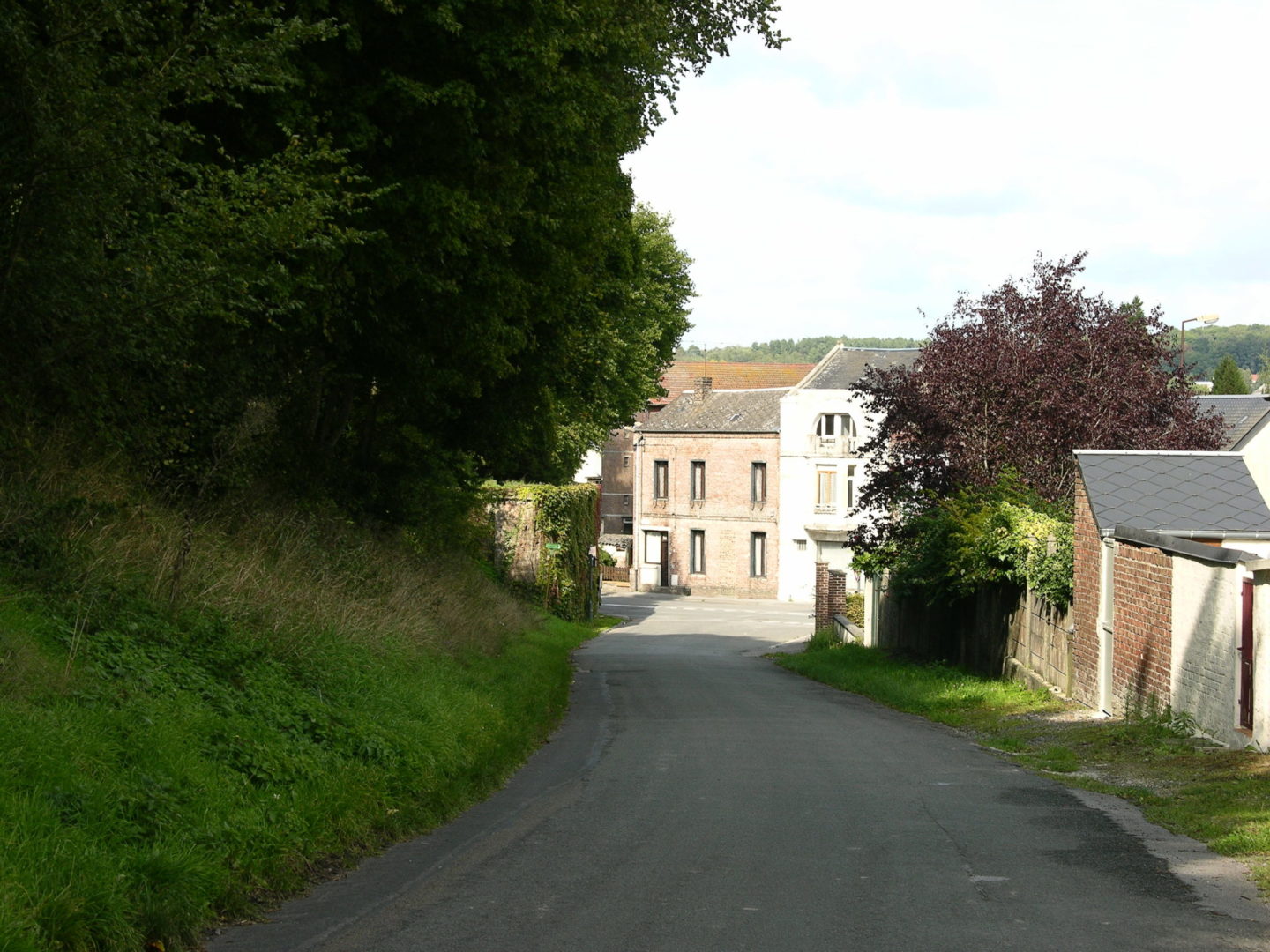 Return down Chemin de Ronde and at the junction at the bottom, carefully turn right and then immediately left on to the D1029 (Rue Jean Moulin). Follow this road back over the river Oise and immediately after a pedestrian crossing, turn right into Rue du Curior. Follow this road until the junction at the end. A sign says no left turn except for the cemetery; that’s where we are going so turn left and then immediately right into Ruelle du Cimetière and park in the car park. (8)

By the entrance to the graveyard you will see this sign: 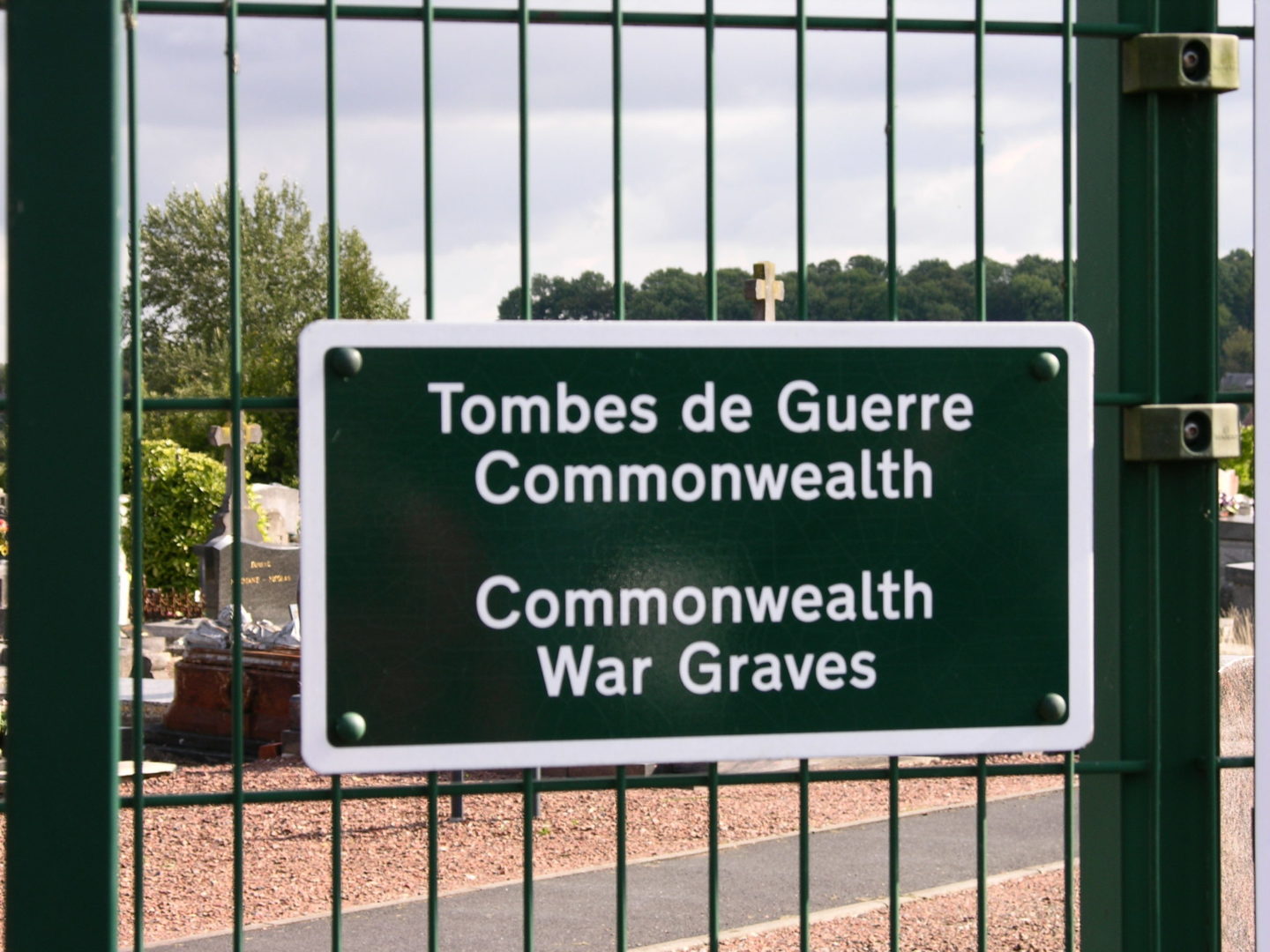 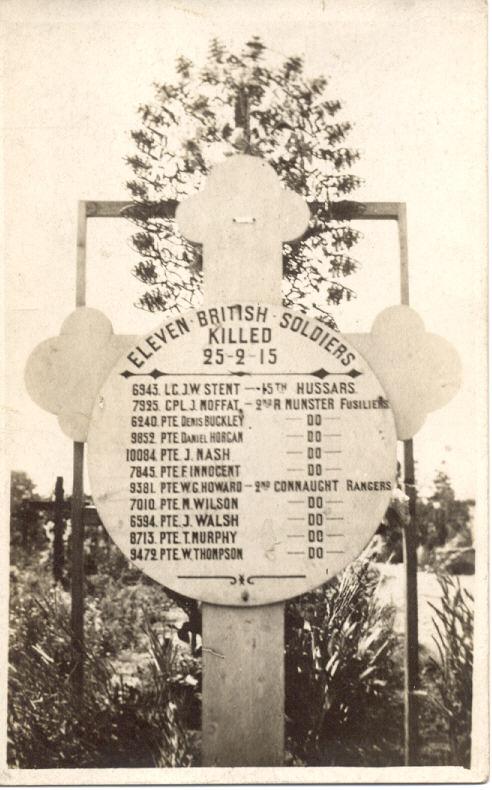 Original memorial when the soldiers were reburied here in the 1920s

The soldiers’ graves are now maintained by the Commonwealth War Graves (CWG) and they are located at the far end of Carre 11/10. 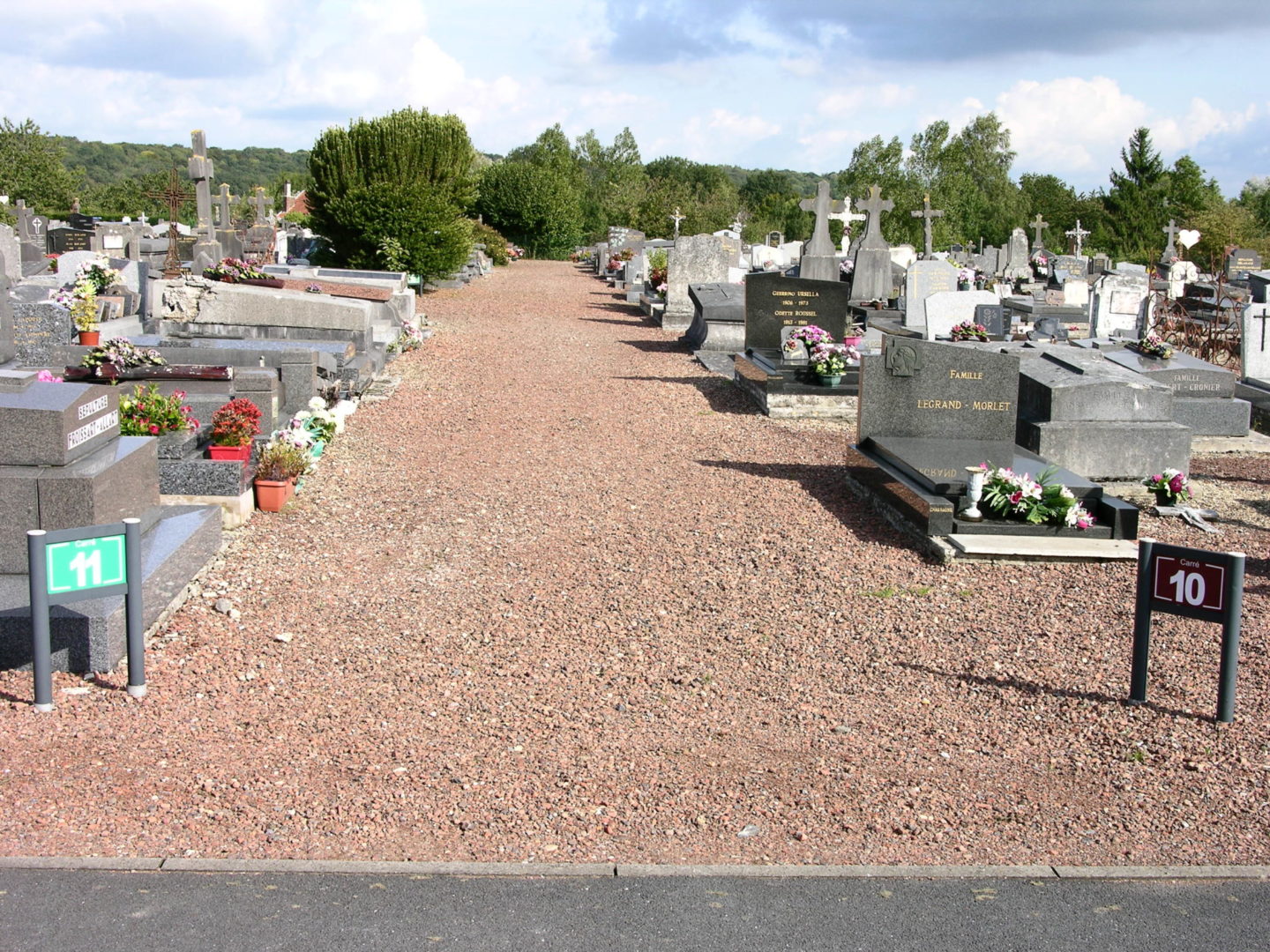 Carre 11/10, leading to the soldiers’ graves 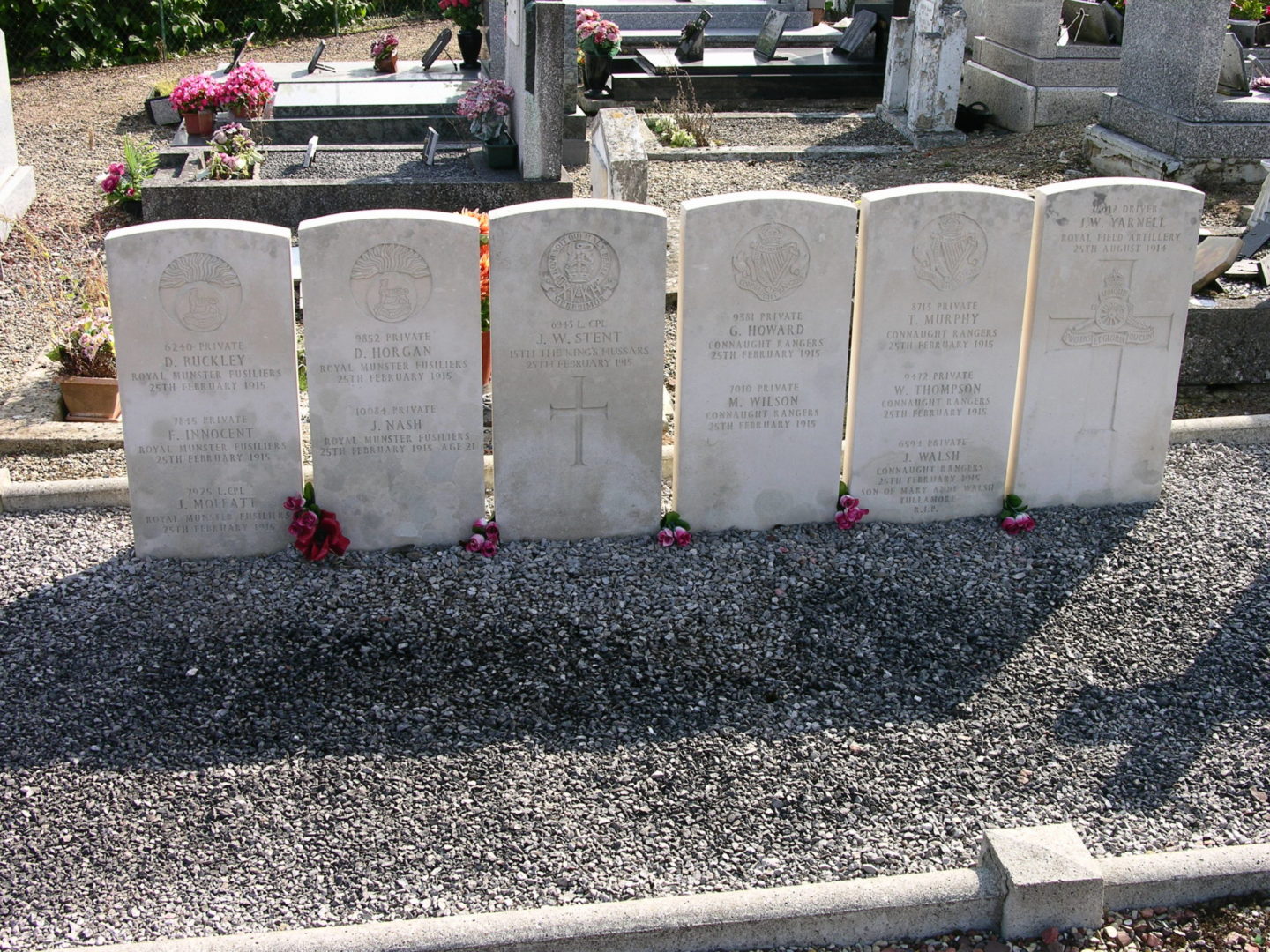 Buried nearby is mill owner, Vincent Chalandre who was executed along with the soldiers.

When we located his grave about eight years ago, it was unmarked. No headstone, no plaque, nothing to mark the bravery of this fine French citizen who willingly gave his life so he could help the soldiers in their hour of need. The Iron Memorial Fund raised funds to enable us to mark his grave with a headstone, gravestone and an inscription.

M. Chalandre’s grave is located in Carre 10/9, at the end of the right hand side, four graves to the right of the Carre. 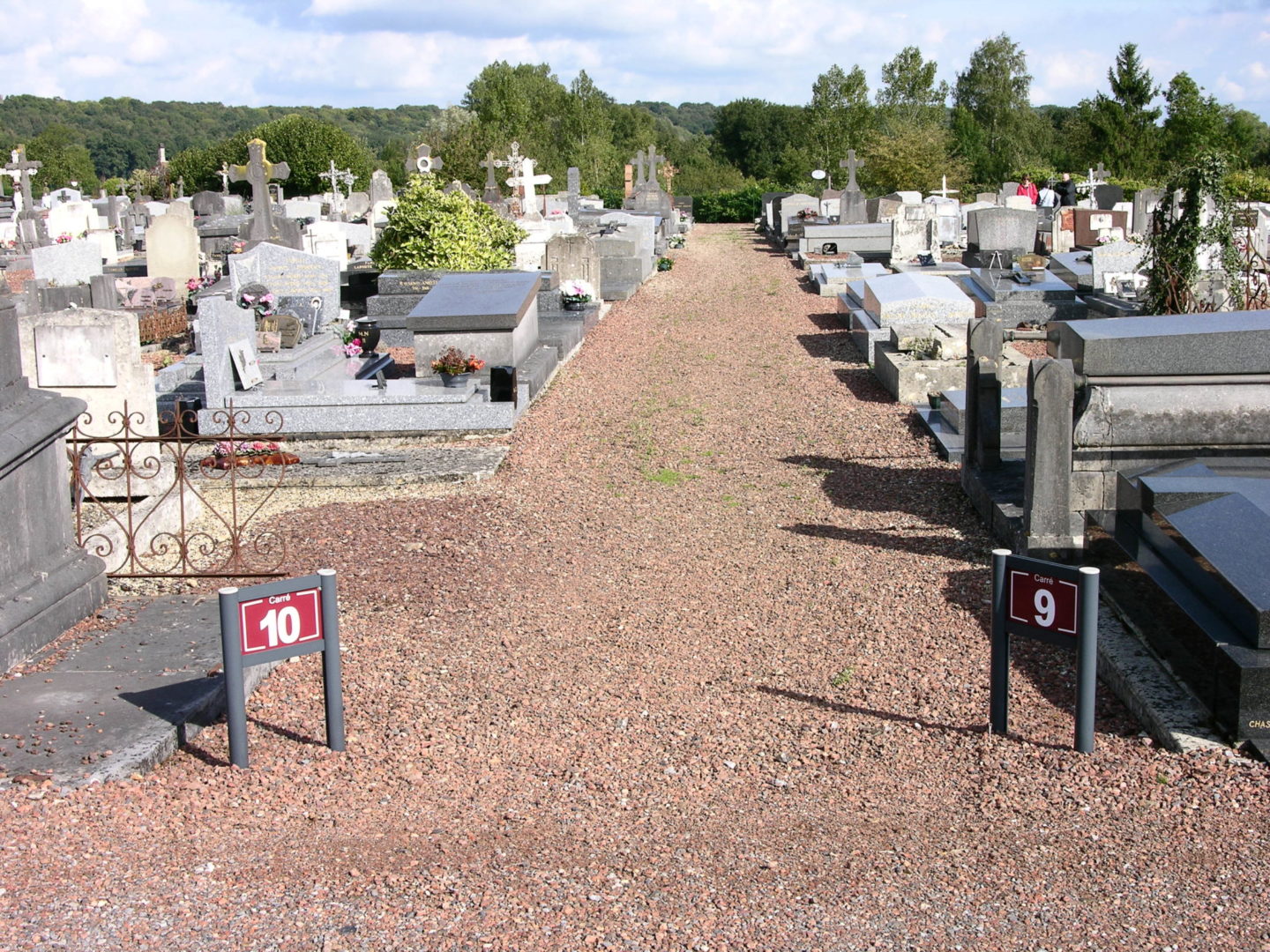 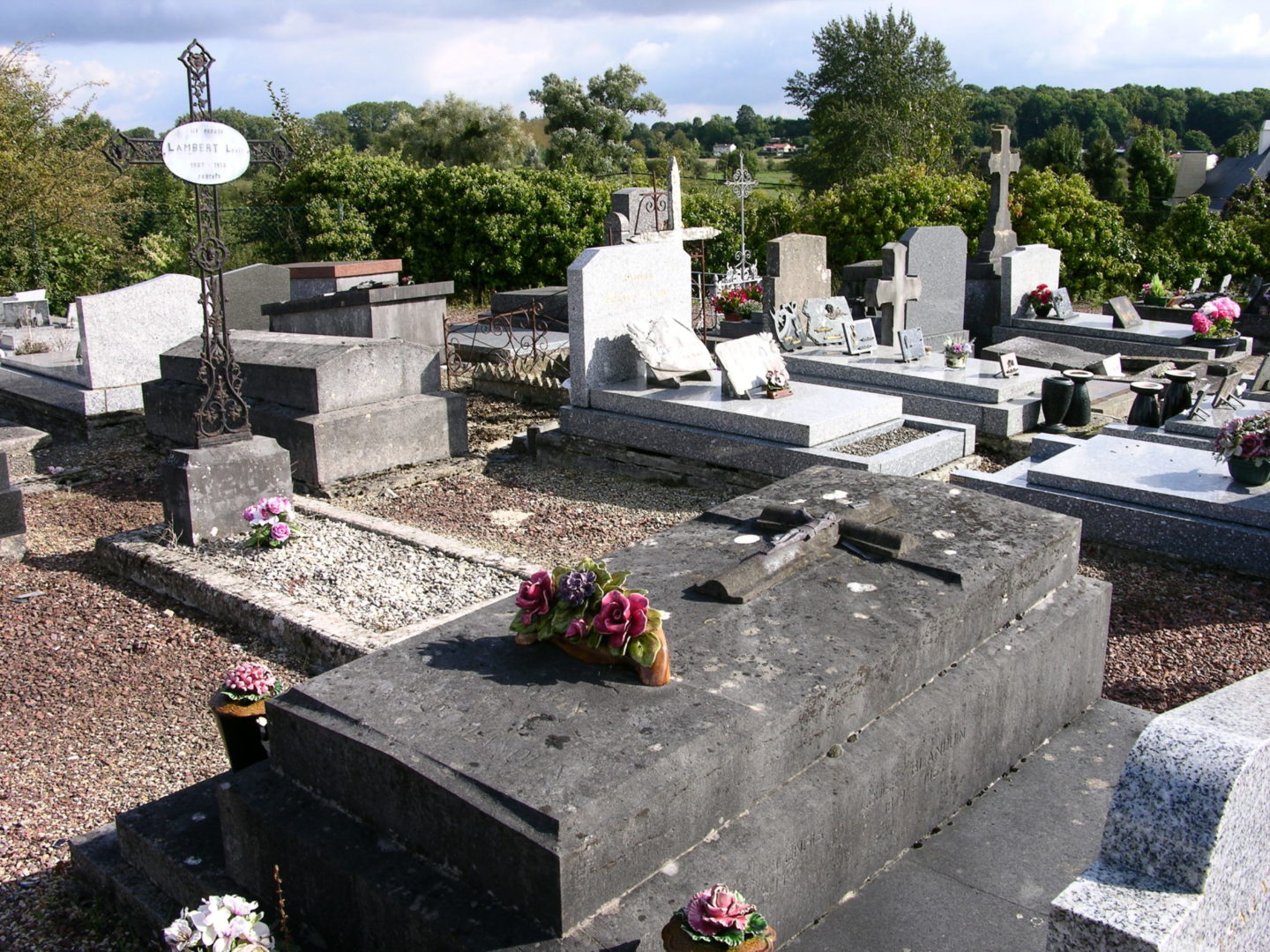 M. Chalandre’s grave is the fifth on the right 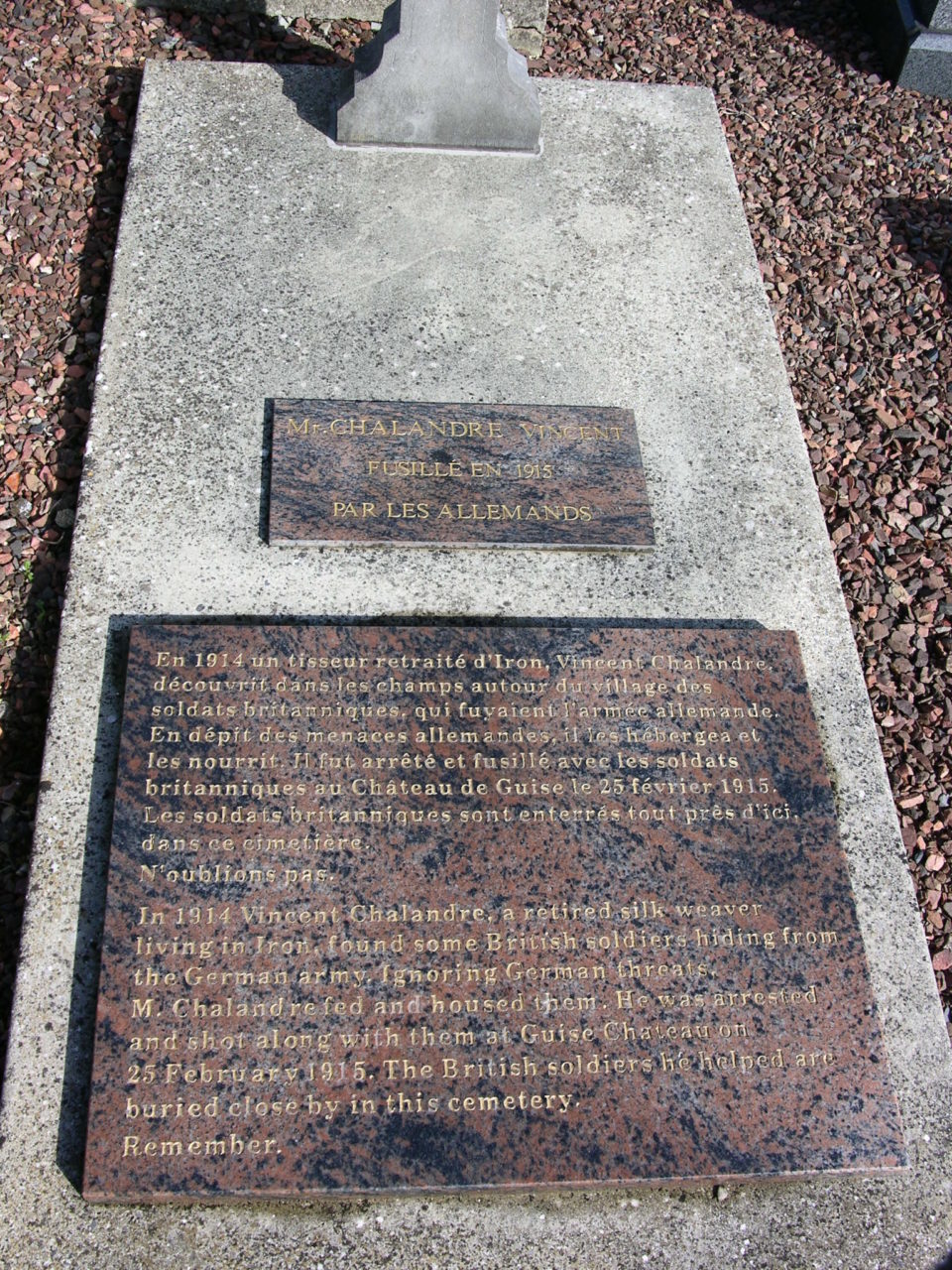 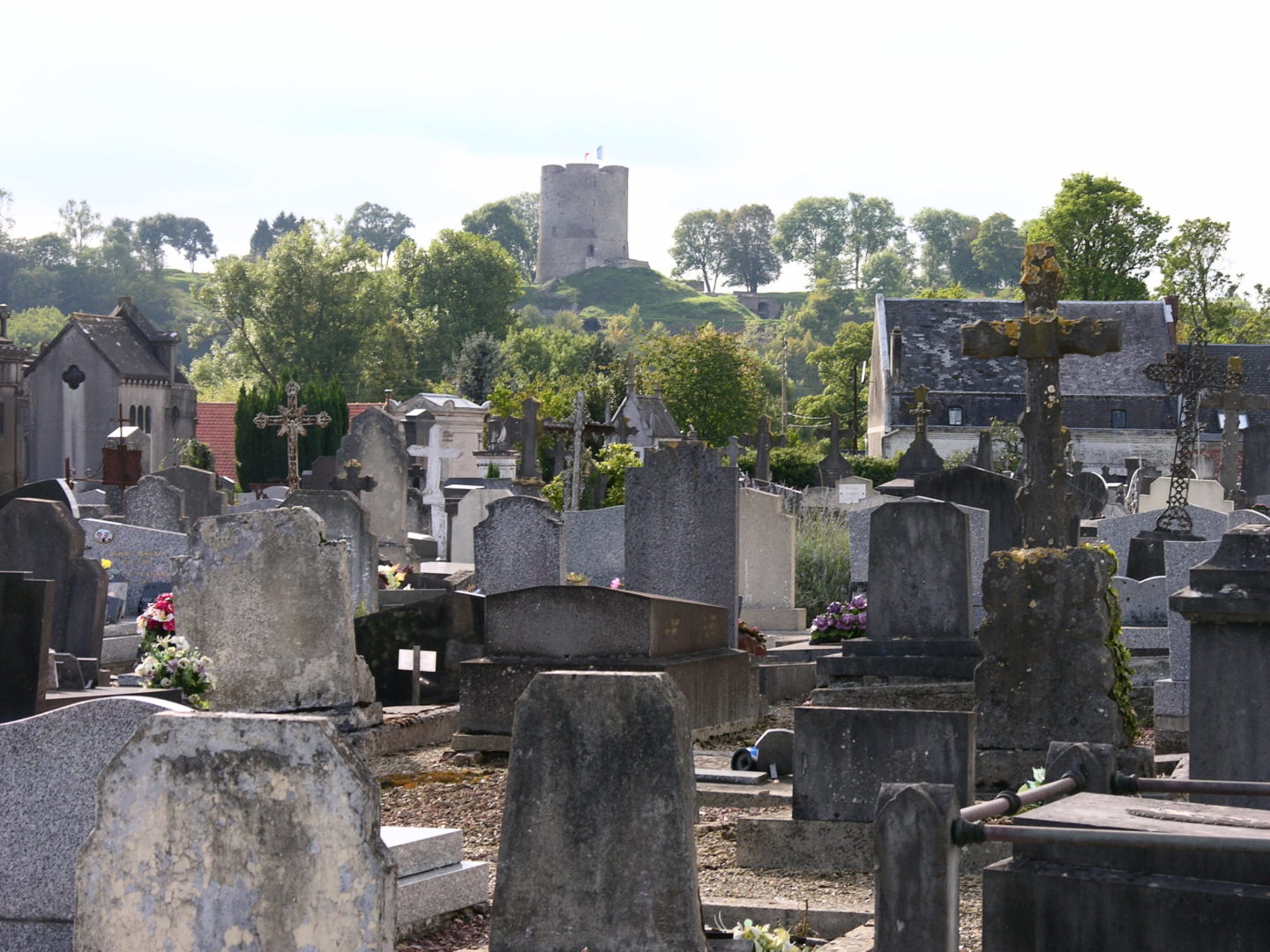 Ironic isn’t it? The Chateau still dominates the skyline above the graveyards where the victims are buried.

That, ladies and gentlemen, concludes the tour. We hope you have enjoyed it.

We welcome any feedback you would like to provide either by email to David Arrowsmith at darrows1@live.co.uk or Hedley Malloch at hmalloch@hotmail.com Alternatively you can use the feedback form on the Iron 12 website, https://iron12.org/contact-us/

The charity, The Iron Memorial Fund, maintains the memorials and plaques created to keep this legacy alive for future generations. The Fund relies on donations to enable it to carry out its work. If you can, please make a donation to the charity; the details of which our on the website: https://iron12.org/make-a-donation/ Thank you.

They shall grow not old, as we that are left grow old:
Age shall not weary them, nor the years condemn.
At the going down of the sun and in the morning
We will remember them.