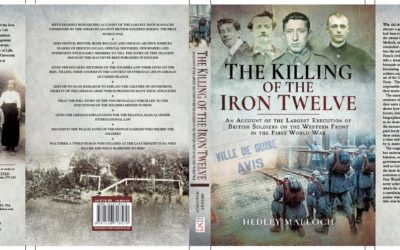 The Killing of the Iron Twelve

The Killing of the Iron Twelve by Hedley Malloch Written by Hedley Malloch, this meticulously researched account, grippingly and vividly recounts the events and fate of the soldiers on the run and the French civilians who helped them. The story is one of dramatic...

END_OF_DOCUMENT_TOKEN_TO_BE_REPLACED

Torn Apart, a novel by David Arrowsmith This novel, based on the Iron12 story, is available from Amazon  in paperback and Kindle Edition. The central character, Charlie, depicts Fred Innocent, one of the soldiers executed as a spy by the Germans on February 25th,...

Iron12
One of the eleven soldiers sheltering behind the lines in the village of Iron was private Terence Murphy 2/CR who was from Sligo. A reservist aged 28 years old, he was the only one of the eleven soldiers who was married. Terence had one child, William Terence, who was born on 4 August 1914, the day before his parents were married. Terence was a stone-cutter with a criminal record for robbery and assault when he enlisted in 1/CR in 1905 or 1906. He deserted shortly after enlistment but was recaptured.

He would have gone with 1/CR to Malta in March 1907, and then to India. He probably returned to Ireland towards the end of 1913 on the expiration of his time in the colours. At the outbreak of WW1, he joined the 2/CR and subsequently found himself at the battle of Etreux which ultimately led to his execution in Guise. https://iron12.org/the-story-part-1/

Terence Murphy’s name and that of his brother, Joseph, (2/RMF) killed at Passchendaele on the 3rd November 1917, will appear together in the new Lest Sligo Forgets Memorial Garden.

Lest Sligo Forgets is a memorial garden devoted to the 600+ soldiers from Sligo who were killed in WW1. You can find details here:

On this day, February 25th, 1915, eleven soldiers and one French citizen were executed by the Germans in a brutal, barbaric act.

In the early hours of the morning, eleven British army soldiers, six Irish, five English and one French civilian fell into a grave that they had been forced to dig by their German captors. The soldiers had become detached from their regiments during the retreat to the Marne in the autumn of 1914. Lost, starving and living in manure-covered hut they had been found by a M. Chalandre who lived in the village of Iron in northern France. He and his employer, Mme Léonie Logez, sheltered and fed them until they were betrayed to the Germans. M. Chalandre was taken with them.

The Roll of Honour reads:

Their execution was the largest carried out by the Germans of British soldiers on the run during the First World War. You can read more about their story at www.Iron12.org

Gentlemen, 107 years on, we continue to honour and salute you.

And a postscript. The invasion of the Ukraine brings an even higher level of poignancy to these memories. It seems that it is always the common people who suffer from the delusions of those in power.

Iron12
The Secrets of the Iron Village Churchyard

It may look like any other French village churchyard but appearances can be deceptive. Side by side in death, buried here are some of the women from opposing sides of the Iron 12 story. The tragedy played out in the village of Iron affected many people; not just the soldiers but civilians too. Especially hard-hit were the families in the village of Iron who sheltered the soldiers. At great personal risk, they came to the aid of the soldiers and suffered the consequences of their brave actions. However, there was also a minority of locals who were colluding with the occupying Germans and who actively helped the Germans discover the soldiers’ hiding place in Iron.

Germaine, if you remember the Iron12 story, https://iron12.org/the-story-part-1 was the daughter of Vincent Chalandre, who first came to the aid of the soldiers. After the soldiers were captured by the Germans, as punishment, Germaine and her mother were sent to the Delitsch Prisoner of War camp in Germany. After the war, Germaine and her mother, in poor health, returned to Iron. Germaine lived in Iron until her death in 1982. She married Maurice Delcher, a successful business man, who is also buried here, but his name is not marked on the gravestone. They had one son, Jean, who died at the age of 26 of poliomyelitis.

Next to her grave is that of:

Jeanne Logez and Léonie Logez
Léonie Logez and her husband owned the mill in Iron and she allowed the soldiers to shelter there before they were later moved to safer accommodation. Jeanne was her daughter and she played a key part in helping to feed and generally look after the soldiers. Both were sent to the Delitsch Prisoner of War camp in Germany and their health suffered greatly.

Jeanne later married André L’Hermitte, the village postman. She died in 1987, aged 88 years old. Her grandson, Andre Gruselle, was Mayor of Iron for more than 40 years. Her mother, Léonie Logez, is believed to be buried here.

Nearby is Blanche Griselin’s grave. Her maiden name was Blanche Marechal and in 1914/1915, she was an important corner of the love triangle that led to the soldiers’ betrayal. She is buried here with son, Léon.

So, some 100-plus years later, the graves of some of those involved in both sides of the story, remain together in the same churchyard in the village where the drama unfolded.

Iron12
🎄🎄Happy Christmas and New Year to you and your families. Stay safe and well. Hopefully we will all enjoy a greater sense of freedom in 2022.
The Iron Memorial Committee
View on Facebook